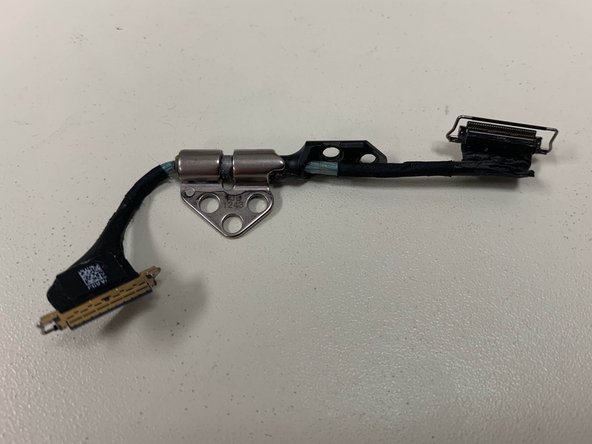 Use this guide to replace the LCD cable connected inside the hinge of your MacBook Pro Retina Display Assembly.

Can anyone help me ? It might be possible that my MacBook Pro 13” early 2015 restarts by it self once in a few minutes because this cable is slightly damaged? It had before LCD problems and has been serviced. As I have noticed, when I touch the cable and move it a little bit, computer restarts immediately, so I thought this might be the restarting problem.

(I have to say that I have already tried other options : I have fresh reinstalled the operating system, so theres no software issue, I have repasted the processor, I have checked the cables connections). The only strange thing is that it doesn’t turn on with the battery disconnected…

Does anyone have any suggestion?

Are there instructions using the MacBook Pro (Retina, 15-inch, Early 2013)? The inside is completely different. Alas.

I'm getting this because the hing broke. The real problem is both hinges have broken. Seems like the other hinge is not possible to replace. Is that right? Will just this one side be enough to open with light use? My Mac is a early 2013 15inch pro. Model A1398

This works on a mid-2015 Pro Retina also. The display is *slightly* different in that the black antenna cover does not simply slide to one side and come off. It has little tiny end caps that can be popped on/off. Apart from that and the antenna had one more screw all the way on the right (away from the display connecter) that doesn’t have to be removed to just lift up the antenna and while holding the antenna slightly up, you can remove and replace the LCD connector. All else was the same and I was able to fix my Mid 2015 MacBook Retina Pro. Thanks iFixit!!!