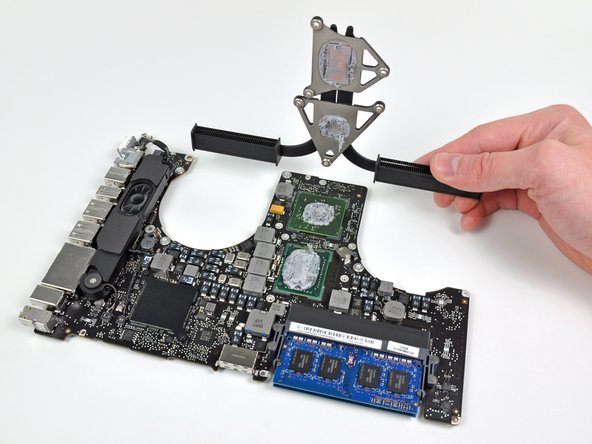 When I opened the heat sink off the cpu and gpu, it was obvious it needs replacing. So much old dried crusty paste. And I'm too not sure they did a good job with the paste when manufactured.

Good luck on your repair and go slowly! Read the comments for each step to avoid ruining your logic board!

Great tutorial, thanks! Wherever it said “use your spudger to…“ I just used my fingernails :D No issues.

Comments are useful too, some additional cautions there.

I followed the instructions and successfully cleaned and reapplied Arctic MX-4 thermal paste on my 2011 15-inch Macbook Pro (2.2 i7/6550M). I had a little trouble removing the logic board as there is some glue holding the speaker on the top of the logic board to the top casing (next to the ethernet port). There was a forum post on this website which was critical for me in knowing how to use a spludger to carefully pry the glued components.

The existing thermal paste actually didn’t look bad, and it was still liquid/paste, not dried (except around the edges where it squeezed out on the edges. It probably wasn’t necessary to perform this maintenance, but there was no way to know that until I pulled this ~10 year-old machine apart. I used the proper tools, including plastic no-marr spludgers and proper torx precision screwdrivers just like the iFixIt specified. I would not recommend even considering this undertaking without the proper tools, patience, and plenty of time available to take your time.