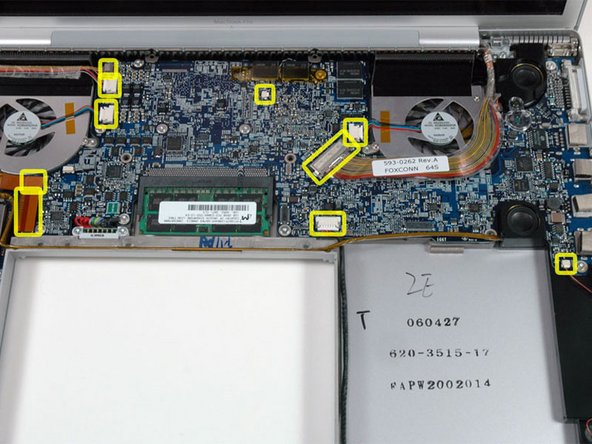 I haven't tried this (yet). However, one note that might be useful:

Note the heat sink compound on the tops of the CPU, video chip, and whatever the third chip is. You're going to need to clean that off the chips and the mating surface and carefully replace it with new compound. Mac's run hot, so it's important to do this carefully (for better heat conduction.

Tried that. Rather helpful, but a few suggestions.

Step 18: I would suggest to avoid losen the screws that that fasten the heatsink to the board - unless your intention is to really replace the board or the thermal paste. It is possible to get the board in and out with the heatsink attached, but you may have to remove the fans first. Do not losen the five srews marked red towards the back.

Step 19: the mentioned coloured cable is not always coloured (it is not in my model), do not mistake that cable with the cable to the battery, which is also couloured and also connected to the bottom of the board. It may also be better to remove the left speaker assembly and the WLan card to get to the other end of that cable and disconnect it there.

If I Buy The Whole Logic Board Why Would I Have To Apply Thermal Compound To The Three Chips? The Logic Board Come With It Already Attached Right?? (17" Macbook Pro Model # A1229 Santa Rosa 2.6GHz) Or Did I Missed Something?

Look at Step 14, the connectors seem to be different, at least at first sight. Why do you want to take that risk, by the way?