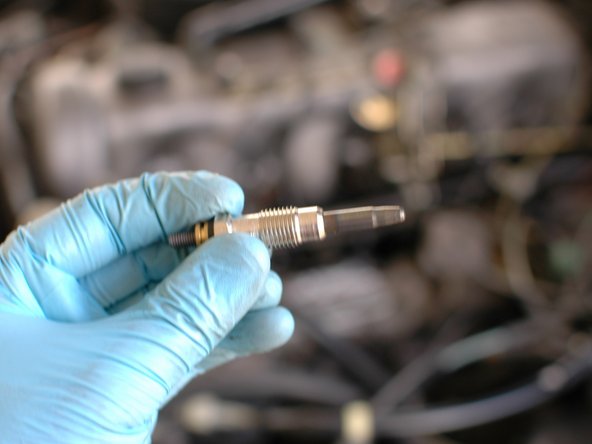 This guide focuses on the replacement of the later "pencil" style small glow plugs with the 12mm thread. These are installed in most W123's after 1980, which was a transition year.

Wired in parallel as they are, they can keep functioning well enough to start your car even with one bad plug. However, the startup may come with some rough running until that cylinder starts to wake up.

After you lose a second, you'll have a rough time getting the car running on a cold day.

So get your new glow plugs installed now! Don't wait to get stuck somewhere.

I didn't know that I needed a Glow plug prechamber Reamer for this Job! I'll have to go back to the Motor-Store shop to do this job properly & to have Patience! Thank you for a clear Step by Step Guidance, much appreciated!! :)

Thanks this helped a lot.

Removing the fuel lines was key to making the job easier. Also a good ratcheting box wrench was necessary. I picked up a nice Husky brand from Home Depot, black anodized, fine ratchet.

Also cleaning out the carbon with the boring tool is another step you don't want to skip, I was surprised at how much build up came out. The build up actually made it difficult to remove the glow plug.

I had 3/5 bad and the car would start after a long crank, now I know I have 5/5. Replaced at 170K, not sure if they had been replaced before.

Thanks for the step by step guide. All in all this was a pretty simple operation that flowed very smoothly. I did however run into an issue removing the nut and wire on the #1 glow plug at the front of the engine. The nut turned very easily, but seems to be fused to the wire, therefore it wants to twist the wire around with it and it wont break loose. I don't want to twist too much because I'm afraid I'll break the wire. I tried WD-40 and it wouldn't work, I even tried holding the wire with a pair of needle nose pliers to no avail. Any tips, tricks or ideas on what I might try??

For anyone that might be reading this now or in the future. WD-40 sucks for applications like this.I would personally grab some of CRC’s Freeze Off.But if that doesn’t work use a propane or map torch. Remember not to touch the bolt.