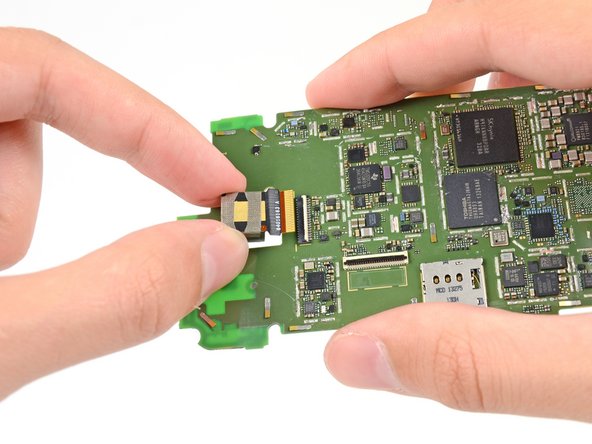 Use this guide to replace a broken camera in your Motorola Moto X, its lunch somewhere, and your food ain't gonna Instagram itself.

This took me about an hour or so to do after I got the right tools. I ordered the iOpener "kit" and stupid me thinking that ifixit would directly link you from this page to a kit that works with it, so I didn't read that the kit comes with a T5 torx bit and not a T3. Also no tweezers. Other than that this guide works perfect. The only tricky parts really were getting the battery out; "mild adhesive" my !@#. I used the black tool to slowly pry the battery out. Be patient and the adhesive will give. The other tricky part was getting the motherboard plugged back in. I thought I had it in the first time but apparently didn't. If you get it all back together and all the phone does when you turn it on is do a 1-2sec vibrate every 10 sec or so then check the connection on the motherboard. Great guide for getting your phone DOD ready. Or any job that doesn't allow camera phones on site!

I was successful replacing both my non-functioning camera, a battery getting on the weak side, and a new back cover (went for one of those colorful back covers sold on eBay). The two things that tripped me up were 1) dealing with that sticky gasket between the antenna and the noise-canceling mic (Step 20), and 2) getting the cover glass to stay put on the new back cover. For 2), I ended up fashioning my own adhesive with 2-sided scotch tape.

*ALSO* You really don't need to do Step 35. Leave the motherboard plugged in, and simply remove and re-attach the camera in place.

I went through each step methodically and only had problems removing the top black cover in step #28. The assembly came off with the ear speaker attached to it, nonetheless was able to put it back. Just be wary that it might not be as easy as pictured.

When putting it all back together though I got an unwelcome surprise... somehow instead of getting the phone turning on and loading android, I got the symbol of the battery reading 80% and a large battery outline icon in the middle of the screen against white background with a light blue indicator reflecting visually that 80% charge. Anyone got a similar issue? I couldn't get android to start as it usually would. What gives? (Thanks for any help! :)

First I just want to say thank you for putting together this wonderful guide.

I've replaced the camera and it works but the camera has a problem focusing and all the pictures are blurry. Do you think it's the new camera or a software issue. This is the second camera I got from Phone Parts USA that has done this. Any suggestions or advice would be greatly appreciated!