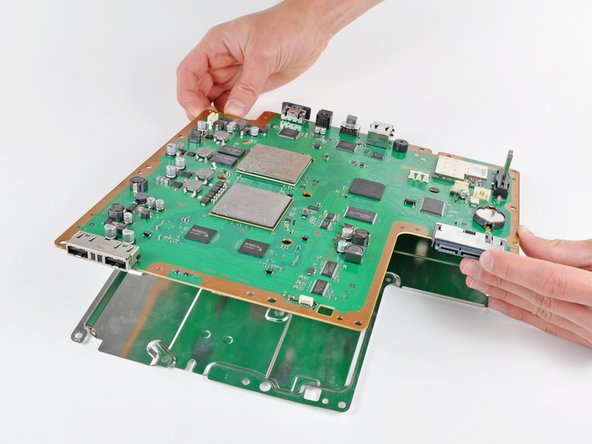 Use this guide to completely replace your motherboard. Before reattaching the heat sink, be sure to apply a new layer of thermal paste.

The most hardest thing of taking consoles apart is putting them back together. I strongly suggest you guys to explain with details on putting it back together. It might be easy to you all but there are people that rather read a few pages than completely $!$@ up the system console.

I can easily open the console but I have no idea where to buy the motherboard from.

I live in Europe btw.

do not force the fan cables out , my grey cable broke of and my power supply cable attached to the motherboard, make sure you take the whole white cable rapped with inselation tape to mae sure the chip doesnt brake off . good luck with it

ps rather let a trained professional do it .

my ps3 not work ,i toke my ps3 to a ingner he cannt fix it he tell me there is no electrsety in mother board even that replesment the power supply

can any one help me how can i fix it, and how much the motherboard cost ?

Where we can buy new motherboard?

My ps3 consoles fan keep spinning up get very load

Will the new board work with the blue ray or is it married?

Fantastic guide overall! Doesn't cover screw head sizes as well as I'd like, but that for the most part isn't a problem here, as it's mostly just variations of Philips heads. The other concern is the lack of clarification that other people may have models that look quite distinctly different inside, but the guide was still easy enough for me to follow overall.