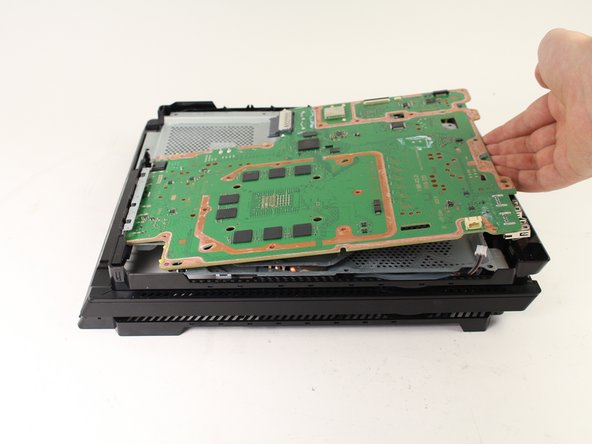 This guide will show the steps needed to remove the motherboard in the PlayStation 4 Pro. The motherboard has many small components that are rather delicate, careful handling is necessary. This guide has warranty-voiding disassembly.

This guide is for the initial release CUH-7000 models. Of note is the changes to the CUH-7100 series that do make this guide an issue. Steps 4 and 5 have a different items to note. You can damage it following this guide if you don’t adjust. There no longer 3 security screws for the case, but just one. This single screw is still covered by a warranty sticker, but the second one is a blank sticker and no screw behind it. There is also no 10mm screw in the center power supply in Step 4, it’s a support post. You still remove the 4 other screws, but you must then flip the console over and remove a T8 screw to the right on the HDD cage and another closer to the right side. You can then flip the console over again to remove the battery and plug it. Just remove all the metal plate screws to be sure, but make sure you hold the board when you flip it again or you will bend the battery prongs like I found out the hard way.

Hi, are these region/console/digitally signed? I have a dead board and was hopint to do a stragiht replacment for antother working board I will buy?

I'm asking the same question? Can you make it work with a board from another console? And do you need to replace the optical drive too?

hi. does anyone knows the dimentions of the motherboard? I want to buy one but I need to make sure that it will fit in my project.