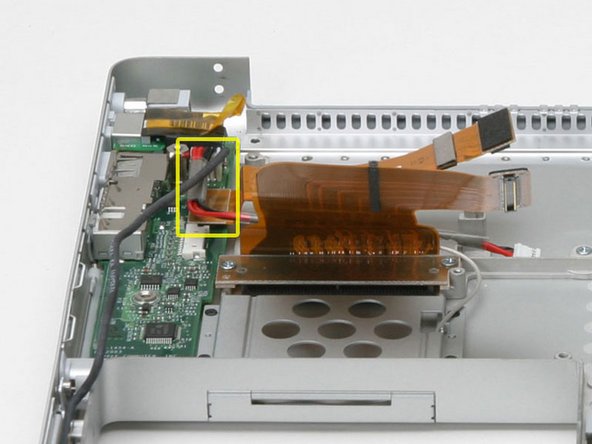 This unit provides power to the machine, allows the battery to charge, and provides sound capability.

I disassembled the PowerBook to replace a faulty DC board and then began performing the steps in reverse to reassemble.

Many thanks for this excellent guide!

My Powerbook is now charging batteries again and hopefully won't shut off when it decides it's worked too hard for the day! :-)

My only note: I was impatient with the keyboard ribbon cable and didn't understand your diagrams until it was too late. I used a fingernail to try and release the left side clip (white plastic)... which I broke off, it's not a clip mechanism, just a spring retainer. you just need to release the black plastic bar in the back under the ribbon cable, there is NO CONNECTOR on the cable, it;s just sort of a pressure fit!

I got it back together and had to use a piece of tape to hold it together... hope that works, unless anyone has a better idea. This laptop won't do much traveling any more, so I hope it will hold.

I also scraped and reapply thermal paste to the GPU chip and the big apple chip in-between (3 total).

CPU temp is running at 59 deg Celcius... hoping that is good? More research is needed.

Well, my PB G4 charged batteries for ca. 1 hour just after the repair 2 weeks ago and then decided it had had enough and hasn't charged a battery since. I did notice it got very hot while charging batteries for that hour. I had scraped and reapplied thermal paste to all 3 of the of the chips on the mobo (CPU, GPU and the one in the middle), so I don't think it was due to that.

I have just replaced the PRAM battery, after determining with apple's guide that it was not able to hold a charge and reading that it can affect charging. Still not charging batteries! Tried two different 65 watt power supplies too. Uggggh. Any ideas?