Repairing a Nintendo DS that is not charging 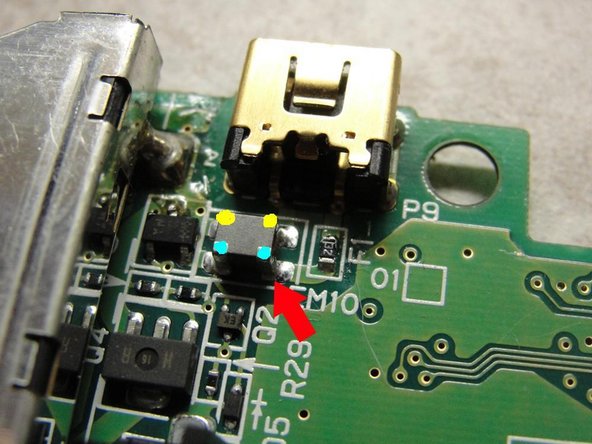 If you have NO charge light on the DSL and the battery doesn't charge, the EM10 power supply filter on the motherboard may be faulty.

This guide will allow you to locate, test and replace the filter.

You will find replacement EM10 Filter's on the internet for a few dollars each.

Removing the EM10 and bypassing it may leave the motherboard unprotected against power supply noise. Remove and bypass at own risk!

you really don't need to remove the wifi board completely, just pop off the cable with a plastic tool or a small flat head even. Getting the cable back under slot one is tricky, and I repair these for a living. Straighten out the cable out first, there are two clear paths back to the other side, parallel to the 2 little twin fuses just at the 7 o'clock of the EM10, and another just above the EM10 itself, again running parallel.

Actually, I have found success by using a conductive pen on Fuse 1 and Fuse 2 and reassembling. Try this before actually taking out a part that belongs there. Watch this video for an easy explanation. It worked for me: https://www.youtube.com/watch?v=502qoZO4...

Why do they even make a filter? Is dumb, also they left it on the bottom where is harder to replace, they should it just had a second smaller battery that would be easy to replace, or something more efficient, more like a strong resistor or something else, also those parts shouldNOT be solder with the board, they should come integrated inside, which is better than javing them solder.

they made it because they didnt know better back then, they also might not of had the tech

Had a DS Lite with error as described: Console worked fine, but the battery won't charge. No light.

At first i exchanged the battery, then i replaced both fuses F1 and F2, replaced the filter, replaced even the power connector. Still same error.

All not worth the effort :(

Bought a console with broken displays and took mainboard from there. Way less expensive ...

Man, I can't find an em10. Plus soldered some lead onto the fuses to see if it'll work. No luck.

i know im a little new to the convo and not many people worry about the ds lite but i broke the em10, is there any specific orientation to the em10, i mean obviously it goes in as image showed but does it matter if i rotate it 180 degrees? thanks in advance!

Did you ever get an answer to this? Gonna have to do this repair in a few days.