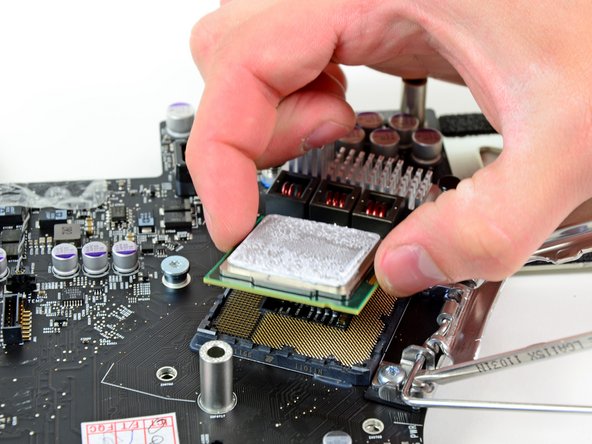 Use this guide to replace your CPU.

Which of the CPU can i install?

Please note that there are guides here to replace the CPU with a i7 2.93GHz on the iMac. This is specifically for the iMac 27" 2010 and NOT the 21.5". Even though the CPU has the same socket and fits in the ZIF socket there is a big difference between the 27" which uses a 95watt CPU and the 21.5" that only supports 74watt. So your only choice is to upgrade to a i5 3.6GHZ.

thanks, upgraded my bottom of the line 2010 iMac 21.5 with a 3.6 core I 5, an SSD drive in the main hd bay, also replaced the defective dvd drive, new thermal grease on cpu, vpu, and north-bridge.

In Yosemite trim can be enabled, used a hardware option for fans to run as they should .

wish I could post a screen grab, it does all indeed work...

Tip 1 - Arrange all screws on a table in chronological order matching this guide, so reversing the steps is easy.

Tip 2 - No real need to remove the IR sensor from the logic board.

Tip 3 - When reseating the logic board, scan back through the steps and make sure all the cables that you will need to re-attach to the logic board are free and available. Don’t re-screw anything back in before checking this.

Hi guys, please tell me, with what processor could I replace this one?

And what video card do you put in this place (this is defective, some streaks appear to me, and when it enters the system, the gray screen is made)?

I upgraded my CPU to i5-660 3.33Ghz, same TDP, socket, etc. My iMac started fine but everything worked slower, I cannot watch youtube without dropping frames, the same on ZOOM.

I run Geekbench 5 and here are the results

What did I do wrong?

I have seen two youtube videos where people successfully upgraded their cpu in this machine to a quad core i7, both 2,53GHz and 2.93GHz. There is a question as to whether or not it will except for 32 GB of RAM or only 24, but I’ve seen the pictures and proof of the cpu upgrade. Before I embark on this adventure, I just wanted to verify if anyone else has had luck.