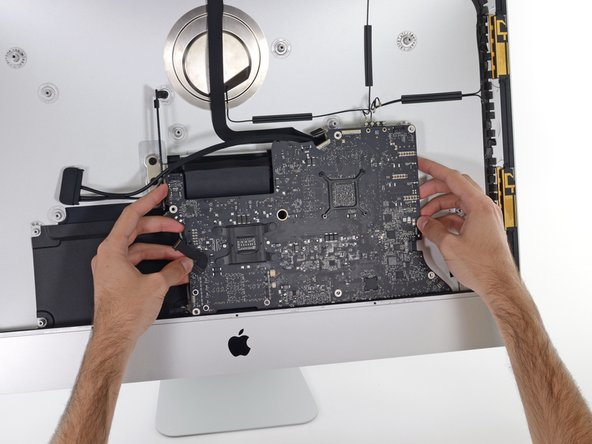 Use this guide to remove the logic board and strip it of all its peripherals: SSD, AirPort, heat sink and CPU, and RAM.

Don't forget to use a ESD Wrist Strap and or ESD Mat; you can fry components by touching the wrong surface or part; don't find out the hard way.

I wonder if its possible to install a newer(2017) Logic Board with a better GPU,CPU and faster USB Ports into my late 2015 iMac 5k.

After all one could sell the old Logic Board and gain some money back - don´t you think it is a good deal?

After the Upgrade I could finally use the TB3 for eGPUs and all other Benefits of the newer iMac Board.

I know, I would have to deal with the Ports and do some work on the Body of the Mac, but if this is the only problem, then I

think it is manageble. What I really do not know is wether the 2017 Board will fit in the 2015 Body or not, and wether the power supply is the same or not.

Thank you for Answers, I hope there will be some.