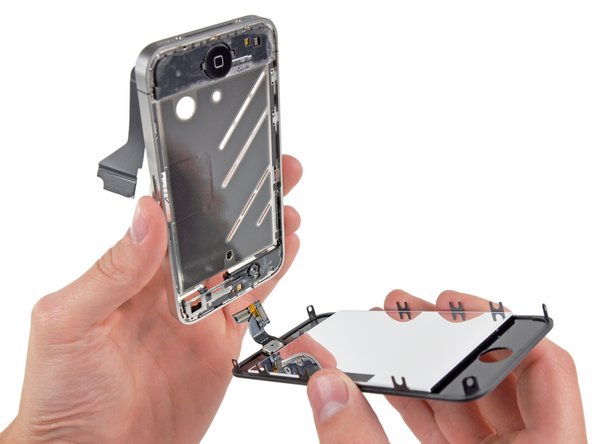 This is an outdated version of our iPhone 4 Display Assembly Replacement guide. Please click here for the new version of this guide.

To replace broken glass you must purchase the glass/digitizer/lCD/frame together because the glass is sealed to the LCD. Do not fall for the cheap glass and digitizer replacements with no LCD.

how do i get the frame to stick to the digitiser., should i use crazy glue or what type of adjesive

You do not need an adhesive. The combination of the existing adhesive (double sided 3M tape), and the screws that lock it in place are more than enough.

Just wanted to say thanks! Took me 3 hours but instructions were flawless I now have a white iPhone 4 and could not have done it without your help.

I was able to replace the LCD panel and digitizer as separate units, but they were separate to start with. That being said, it's definitely more challenging. it's pretty easy to get the two attached to each other, just takes 2 drops (1/10th of one ml) of clear oil. i used a 1/2cc syringe to spread a thin line down the center. came out absolutely perfect. without the oil it's horrible. No contrast and just moiré galore.

The added difficulty comes from getting the two parts to behave while assembling, since they aren't glued, they slip and slide around, and air can get in on the edges and no more dark black.

i tried first with water; terrible results, it interfered with the capacitive touch; ouch. So, i got some practice today re-assembling the phone. the guide was priceless—this is one of the most complex teardowns of ever. i used 12 compartments of an 18-comartment bin.