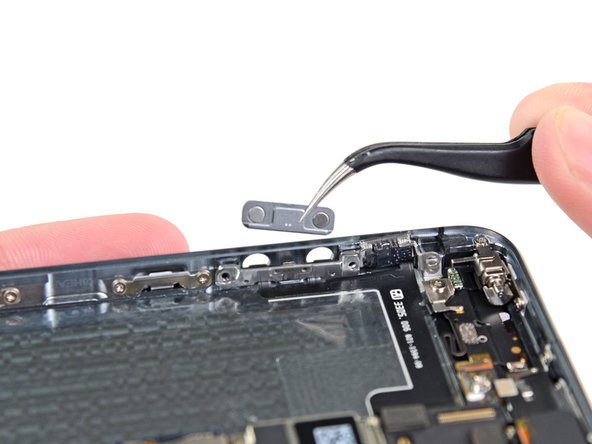 Use this guide to remove the ringer switch and volume buttons from your iPhone 5s. This guide requires removing the battery; be sure to have some replacement adhesive strips ready for securing the battery before you remove it. If the battery is deformed at all during the procedure, it should be replaced.

My phone was shattered and i did a total replacement of the rear case and the screen. All went well except... the volume controls do not work. The silence button above it does, but the +- dont. They feel wrong when pressed. They don't make the clicking sound. Anyone a suggestion of what went wrong?

I had to replace the power flex cable, which means taking almost everything out. Scary! When I restarted, my power button and flash were fixed but my volume was the same as yours and my home button didn't work. :( That Touch ID cable and cover are from h#$l! Anyway, I went back in and everything is working now. Instead of doing them like in the photos and videos, I attached the silence button first and then the volume buttons. So when you put in the middle screw that holds them both in, the screw goes through volume first and then silence.

Oh ya, ifixit is a great resource. Thanks!

I noticed one thing during my replacement that may affect others doing this repair. Upon reaching step 30 I noticed that my volume button bracket appeared to be bent slightly near the lower screw (the one toward the bottom of the case). Ultimately I had to bend the bracket to make the volume button work correctly. When I reassembled the bracket with the new buttons before bending it the - button would not come back fully to its normal position. After careful bending with a pair of needle nose pliers and the button worked correctly.

It is CRITICAL that you test your volume buttons and the ringer switch before you reassemble your phone!

Great guide, but I can’t get out the screw that is located between the volume up button and the mute switch! It is not stripped (at lease the head isn’t), any ideas?