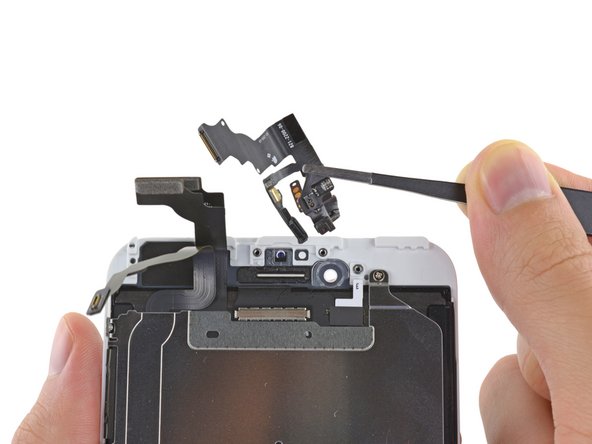 Use this guide to replace the front-facing camera and sensor assembly.

My front microphone had completely stopped working exactly a week out of warranty. I replaced the front assembly with a new one from Fixit and afterwards it still did not work. Then I realized the microphone did pick up very soft sound if I shouted directly into it. I eventually repeated the entire disassembly and found a very thin yellow film glued to the microphone grill which had been muffling 97% of the sound. After peeling this off my microphone is working perfectly! I did not notice this on the microphone the first time and assume it was the backing for the self adhesive. Make sure you remove this - it is not obvious to spot!

ave did wrongSo I replaced my iphone 6 plus screen and after i was done my front camera and my earpiece was no longer working. Any advice on what i might have did wrong ? I have another iphone plus to replace the screen and im a little skeptical now. =\

Fantastic instructions! fixed my problem first time. Just be patient and try not to touch anything to roughly. Thanks for the tip from a previous comment saying to remove the yellow piece of film over the microphone. This saved me a lot of hassle. Thanks

Glad to have siri, dictation, sound in videos and hansfree calls back :)

Is the picture quality the same