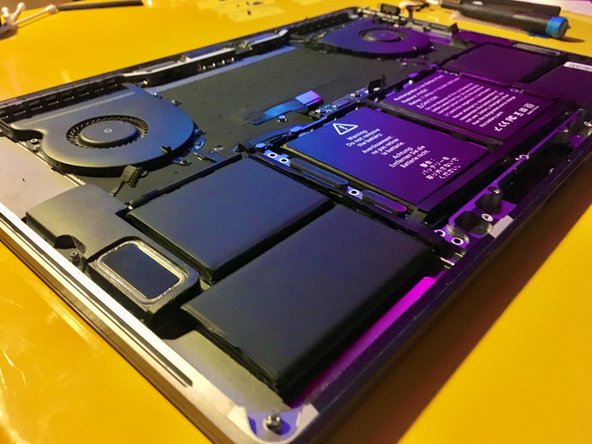 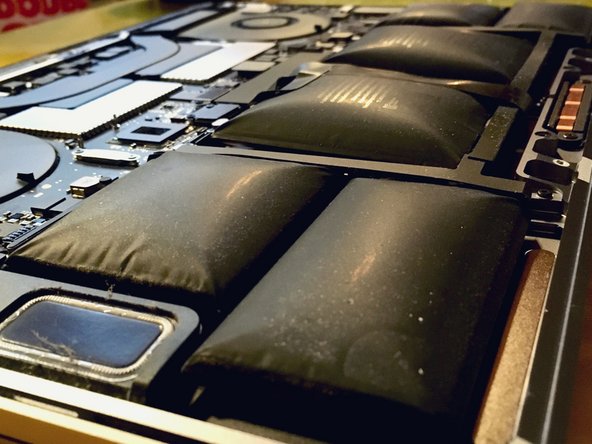 The battery in my MacBook Pro (Late 2017) had been increasingly bulging since shortly after it was initially purchased. By one year after the purchase date, the battery had become sufficiently voluminous to deform the aluminum case and prevent the lid from closing fully.

By the time I ordered the iFixit kit, the lid wouldn't close at all and the touchpad haptics had gone wonky. This puppy wanted to be liberated.

The replacement was surprisingly painless, if not a bit a tedious. This was my first foray into the case of a post-2012 MacBook and I had been bracing myself for the difficulty involved in dealing with the myriad not-user-serviceable components.

Fortunately, the guide was exceptionally clear and comprehensive, leaving little room for misinterpretation. Many of the logic board connectors seemed dauntingly tiny for my clumsy hands, but I ultimately had little trouble in disconnecting or reconnecting them.

The battery replacement itself was fairly smooth. Once the logic board was out, dissolving the adhesive was a straightforward process — installing the new battery even more so.

My total time, from case opened to case closed, dipped slightly above the high end of the estimated duration. However, I attribute this to a larger-than-usual number of Twitter updates made along the way coupled with an obsessive need to clean every last trace of adhesive from the case before installing the new battery.

Other reviews have suggested that the logic board removal may be overkill and that the board need not be removed to replace the battery. While I did not test this theory directly, it certainly seems to hold up based on my observations during the replacement. I suspect the logic board removal may have been suggested to prevent the possibility of damaging the board with the solvents used to remove the battery adhesive. While the adhesive removal process can become messy, I personally had little problem in removing the adhesive with small amounts of strategically applied adhesive. If it is possible to safely replace the battery without completely removing the logic board, the total length of the process would easily be cut in half. Your mileage may vary.

During the remounting of the logic board, I inadvertently trapped the keyboard cable beneath the board. This happened despite several warnings against similar scenarios in the guide as well as my own mental bookkeeping. Because I discovered the trapped cable only near the very end of the reinstallation, I was forced to choose between fishing the delicate cable out using a tool or disconnecting all of the other connectors and removing the board again. I opted for the former and very nearly severed the cable in the process. While it ultimately all worked out in the end, I could have saved myself some grief by recording a list of all the cables disconnected during the logic board removal as well as their placements and then verifying that all were routed properly prior to remounting the board.

Finally, I would strongly recommend either purchasing an iFixit project mat for this or otherwise setting aside a series of clearly labeled spaces for all of the fasteners removed. I was fortunate in having the presence of mind to set aside and label the screws used on a per-step basis, each with the step number and fastener sizes listed. Had I not done this, I almost certainly would not have been able to reassemble the machine correctly due to the ultra-minute differences in fastener length (e.g., 0.1mm).