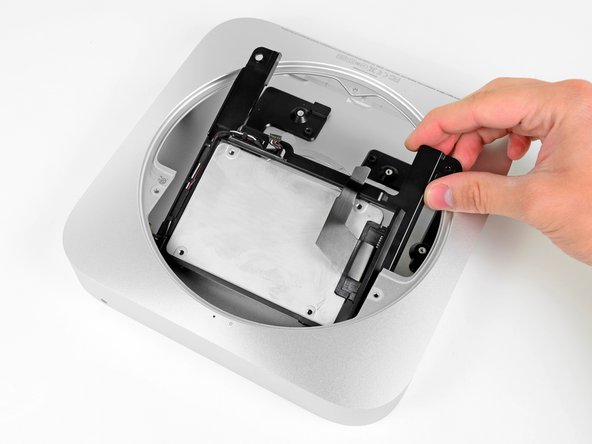 Price discrepancy between I7 Mac Mini and I7 Mac Mini Server. Why pay 200 to apple when you can put that money into the server? The 5400 rpm drives as we all know are slow and useless (well maybe not useless but close) Why not spend more and put dual SSD drives in? Well that was the thought until I found that you can't RAID boot a Mac Mini with Mountain Lion 10.8.2 so I will just use the second drive as a storage drive and boot off of the SSD. I wanted the ability to have fail over but I guess I will just have to hope and pray, and backup...a lot; but, isn't that what we are all doing with these automagic boxes from the devel any why?

Perfect... Stupid easy and quick!! No prior knowledge needed. total DIY project. Took about 10 min and booted first time without any issues. Nothing exploded (always a plus unless that is what you are going for)

OK so Apple sells the I7 mac mini server for something like $977 they also sell the standard I7 mac mini for $778. Apple sells the "Server" application for 19.99 in the app store. So if you purchase an I7 Mac Mini. I got mine from Microcenter for $688 as an open box. Who purchases a Mac Mini and then returns it without as much as turning it on, what was it not what you expected? whatever. Right off the bat you are saving ~$200 but you don't get that second 5400 rpm drive (gage) so purchase this little kit for ~$50 you now have ~$150 to spend on an SSD drive right. Sure it takes a few days to send the part but the mini screw driver set and little pry bar are much better than I expected and I will be using them on several other projects/tinkering/breaking/fixing... you get the point. Again totally worth it. They are not, mind you, top quality but they are right under that and very useful. The screw driver set is actually a security screw driver set so you don't have to battle those stupid little pins in the screws (not that the mac mini has any but whatever it's cool to have) Mac Mini's are the most user friendly best designed ultra small form factor computer I have ever worked on. You don't have to be afraid of opening them up at all (I used to do service for Dell so I have worked on... a couple, insert sarcasm here) So my advice for the novice is; take a look at the video, order the part, and tare that thing apart!!! (just do it gently and don't misplace any of the 10 or so screws... you will need those to put it back together which surprisingly is as easy or easier than pulling it apart) In the end you will have a kick ass server for the price of a not so kick ass server. Have at it, don't loose the screws, it will work unless you loose the screws, actually it would work without the screws but I wouldn't recommend it.