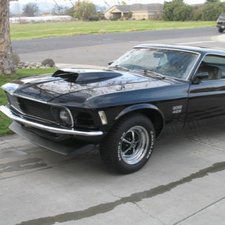 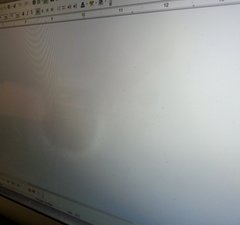 So when I have a white background you can see a circle in the middle of my screen. When its in color or picture its faded, it right in the middle of screen about 2 inches across. Whats going on? Can anyone help?

Hey Ross hows the 429? I answered a question on wheel hope a while back remember?

So it looks like you piled something heavy on top of your very thin, very flimsy MacBook air. This has left an imprint on your diffuser.

To answer your question it shouldn't get any worse as long as you don't pile more stuff on top.

I've heard killing the light does help but not by much. As for a cheap fix you can buy an old mac air for parts if you can find one otherwise its not a cheap fix. I would learn to live with it as it is an old air. Dan says late 2010 so 5 years old.

Once again cool car. Any chance of posting a pic on this page?

i fixed mine ross. try applying pressure on the back .

What I suspect happened here is you had laid something heavy on top of your air so the logo disk in the lid embossed the defuser sheets. So what you see is the light from the backlight (really on the upper & lower edge) being distorted by the damage.

Sadly, this is not an easy repair. Most people have found they end up making it worse! I would live with it, or think about finding a used display assembly to replace yours.

Yes, this is the light source for the screen (Back Light).

No it won't get worse as ling as you don't put something heavy on the lid again. Frankly, you were lucky here! More often the screen gets damaged (black or color bars).

As for altering the brightness it may help to make it less noticeable. But that will only go so far.

So this is from the light on the back of the screen ?

if I make it so the light doesnt work will that help?

Will this get any worse?

I did have this issue a couple of minutes ago after leaving my thin asus laptop shut with something over it for a couple days while I was out. Miraculously, I was able to fix this by applying pressure using my thumb against the other side of the screen on what I thought was the center of the ring before that I applied some pressure to the actual screen in the center of the bubble too if it doesn't work the first time. Maybe my case wasn't so severe if it doesn't work for you but the ring was brighter than the rest of the screen and at least an inch wide. Best of Luck!

(This is a pic of someone else doing what I did but I did it on the center of the ring and tried both sides!)

Still works n 2019 Thanks That circle was annoying

How long did you continue this process for until you managed to fix the problem? Because I'm now attempting to do the same thing as you've recommended but the ring of light still hasn't subsided, although I haven't been doing it regularly.

I just did this, and it worked...kinda. I have a 2012 MBA and did just this and it made the halo ring less apparent. THANKS!

You caught me taking my dogs out ;-}

Sorry Bud, just brought mine back in:-))