It is stuck on the lg screen

I have a g4 that is stuck on the lg opening screen. What do i need to do to get it fixed?

How do I get the phone working for data recovery?

I had mine die the same way. I got my data off by reflowing it with a high wattage hairdryer (Conair 1875). My method is NOT for the faint of heart as it requires some electronics experience to get right as it’s a limited chance repair, but if you think you’re up to heating it up and maintaining it so it runs to get your data off (without shutting down the phone, as it will likely be truly dead), for recovery purposes it fixes the issue. I was a little sensitive about how much heat I used on mine because I had a 509K phone, which is a known bad range. At the time, I agreed to keep evidence I was in low/nonexistent. It did work, though. That said, an approach to how I explain these kinds of recovery only fixes at work is I mention the LG, and I will flat out say it: If I had to pay the account holder off (I didn’t finance it) to have unlimited chances, I’d have done it. It’s a raw deal for the other side and a good deal for the other as they got a partially paid for phone on the other party’s expense but when the data is worth more you do it.

The only real downside is LG may not repair the phone, but they will just replace your dead G4 with another G4 that will probably die the same way and Depot the dead phone. If they replaced it with a reliable phone, I may have sent mine in, but I wasn’t interested in another copy of the same crappy phone because they did the bare minimum — even then if the person financing wanted it done, I did warn them I would not use the phone, and to shove it in storage for all I care if they really wanted to "hold onto something" that I didn't ask for/caused me grief for closure (they didn’t, so I still have mine albeit a ruined board due to data recovery). That was my second (and last) LG phone I ever bought.

Nowadays with the current financing methods (and the death of the $200 phone for a 2-year contract), I buy my phones outright since it’s the same price now, or over 2.5+ years and use a cheap prepaid plan. The other issue I had was LG’s track record isn’t good. I have stood my ground on this since 2017 and haven’t looked back. In addition to that, LG has since left the mobile market since they quite frankly lost a lot of customers to this bootloop issue, and their middle finger to anyone affected.

This is how the device that was used to figure it out stands today — it’s a reminder of how I was left on my own to find out and get it done knowing the issue is hardware, and found a way to get it done. I point to it as a way to dispute others if anyone asks what my push was to figure out board level failures. The cat is a hint as to why. (Yes, I did remove the battery as I don’t need it for this, nor do I want a spicy pillow around, if it ever happened). 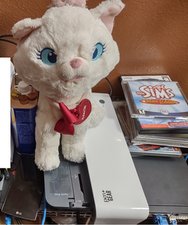 You have done all the process successfully

How long doesn it takes, for the factory Reset to process?

ok i did all and factory reset , it started back up and still got stuck on the orange Verizon screen.. no luck here

This is for a L41C. Before doing a factory reset, which is a major hassle as it erases all your personal data and settings, try following the above procedure, but when you get the LG screen, keeping the volume button down (I think, if it doesn’t work try releasing the volume button) press and release the power button several times. This has twice gotten my past the boot loop problem.

Then back up all your data and pictures to the cloud or hard drive. Get everything synced to the cloud either through Google or other means and make sure the sync works. It’s bound to happen again, though it did wait for a couple of months. I don’t know what caused it after a couple of years of no problem. The second freeze occurred while the phone was working and on Weather.com. I believe the first was another phone freeze. The freeze doesn’t allow the phone to turn off. Taking the battery out to try a restart gets one to the LG screen, making it seem like its a boot problem, but the freezes I had occurred before this..