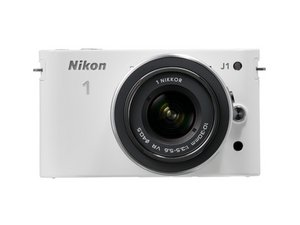 Designed to provide professional results in a compact package, the J1 comes in a variety of colors and lens attachments.

My Nikon J1 wont turn on.

My Nikon J1 sat unused for about 6 months. I charged the battery but it still won't turn on. Suggestions?

To begin with, if you left the battery in the camera while you left it unused for 6 months, the battery might have degraded to the point that the charger will not recharge it. This is because the camera drains a tiny little bit of power from the battery even while it's switched off. This may have discharged the battery below a critical voltage (which is in the range of 5 to 6 V for this type of battery) and most chargers will consider a battery defective when the voltage has dropped below this point and refuse to charge it.

Note that Nikon recommends to remove the battery from the camera if the camera is to be left unused for some time, probably for exactly this reason.

If the battery voltage is low and the charger refuses to charge it, the battery might still be recovered but this is a bit of a tricky procedure. Your best option is to replace the battery.

If you're positively sure that the battery is good, and the camera still will not turn on, try the following:

I have the same problem with the J1.

Battery is good, conatcts are good still won’t turn on.

Most likely the power board (the PCB on the top) has an issue. I have already measured the Zener diode at the power input and the fuse. Unfortunately I could not find any schematics for further troubleshooting so I think I will replace the whole power board if I can find one at a good price.

If I wanted to have it fixed by Nikon I would need to send it abroad as they don’t have any repair center in my country.

Another triumph by Nikon. I don’t understand why so may problems with one time iconic name. I trough my N1 out for the same reason. Doesn’t turn on. To fix it cost more than a new one.

Ebay listings for this model is filled with lensless camera bodies and defective units. It is also filled with nonfunctioning lenses for sale. I regard this as a case of poor production design or poor quality control. I think later models have solved these problems, but I recommend staying away from this and the 1V1 which has the same lens problems.