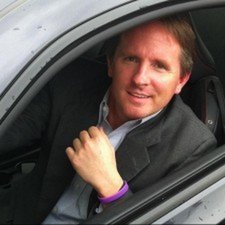 Microphone Not Projecting My Voice to Callers

I had one of these phones turn up in an auction lot I purchased for repair. After fixing the screen I began to test it and everything passed but the microphone. A friend of mine used to have this type of phone with the same problem, he took it to a shop and was told that the screw in the bottom-middle was not in the right spot and it punctured the mic making it inoperable. He claims my screw is in the same spot.... It looks correct to me.

If I'm not mistakenthe microphone is a tiny gold piece that is like an inverted conical shape and I don't see anything on mine that appears damaged.

I have found threads online about these phones with microphone problems, but no concrete solution. I need to know if I can get this mic working, or do I need to replace it and try to micro solder? I've seen logic board replacements for around $12, and I've sold the phone on eBay before for $50 so maybe not a bad investment if need be. But I hate giving into replacing something if I can fix it....

Hi, Have you verified that the voice transmission circuitry is working by using the earphones with the microphone attachment to prove that you can be heard on a call or even that the earphone socket (if it is faulty) is not disconnecting the microphone?

I didn't think about using the earphones with the microphone attachment, that's a solid suggestion in general and I'll remember that. But I have had audio coming out of the speaker, such as when it boots and says "Droid...." and I've called information and can hear the ringing and message.

I'll try the earphones and see what happens, but I'm fairly certain there aren't any issues with the earpiece.

I was referring to the earphone 'socket' not the earpiece.

When you plug in the earphones with the attachment it cuts off the internal microphone. I was just wondering if there was a fault in the socket which may be causing the can't be heard problem.