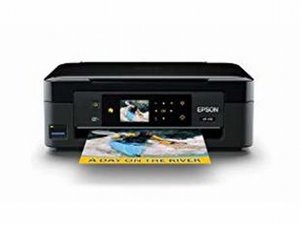 New ink installed, will not print --?

Black ink was full, but would not print. Cleaned print heads, and only red printed boxes. Cleaned heads 4-5 times, still no ink on paper. Printer acts and sounds like it's printing, but nothing come out on paper. What to do?

Edit: "All 4 cartridges were replaced with Epson brand cartridges."

All 4 ink cartridges were replaced with new Epson ink.

I have the same problem. Spent the money for all 4 new cartridges and nothing gets copied or printed. The printer is only 2.5 years old & used sparingly in my home. I copy/ print maybe 80 pages PER YEAR. The Epson support rep. did the same cleanings I had done 6 times. & said I had a hardware failure. This is NOT acceptable to me. NO MORE EPSON products for me!!!!!!!!!!!!!!!!!!!!!!!!!

fyi. I was at Office Depot yesterday and they said to bring the new cartridges back for a full refund if printer still would not print after installing.

this happened to me today... I have and hp 3526 printer. I tried both brand new black ink cartridges... says they are full but will not print any black

Thank you so much. This worked for me. Wow.

it worked for my HP :

take your inks out, turn off the printer (disconnect it from the power while the cardriges are out)

turn on the printer (it will say no ink)

than just put the ink back in and try to print

It worked!! Thank you.

tried it and it did not work :(

Thank you for posting. It worked!!

Quick and easy fix! Thanks for posting!!

press the ink cartridge s until they click into place

This is not a helpful answer. By the original question it is obvious that we all know how to properly install the ink cartridges and have even cleaned heads, replaced ink completely. It is much more helpful if responders read the complete question/string before answering and not just respond to increase your post count. Thank you.

Not Helpful hear other. I had this issue twice now. I wen and bought another EPSON. Not again.

When taking it out of the box there is a plastic sticker over the hole where the ink comes out make sure to remove that. Try taking your ink out and put in back in. Try resetting your printer.

*Read: I know this because I often pick these up for nothing and use them as a cheap scanner.*

With Epson it’s almost always a hardware flaw. Epson has designed their printers so the printhead is difficult to remove for normal users - it’s not an issue if you’re used to it, but it gets first timers all of the time. At this point, clogging is a well established design flaw Epson has yet to fix because they make so much money on consumables since they change them every refresh.

The issue is usually caused by OEM Epson ink (and is compounded with false “security updates”, which only block 3rd party ink carts). Pigment is far worse then the dye ones as well, but it happens on both. The other common issue is printhead air, but that’s usually associated with inconsistent print quality issues. That can be fixed by forcing the air out. If it’s clogged, the cleaner can be found on eBay. NEVER UPDATE THE FIRMWARE ON EPSON PRINTERS! Let them live with the fact their BS “security updates” leave printers open to attack.

PS: I used to love the Epson printers for scanner use, but after the black cart bait and switch firmware I’m pretty much done with anything Epson - even used. They have some of the best scanners I’ve used, but the firmware issue makes it hard to know if it’s going to be cheap or expen$ive to put ink in if need be. Especially if I don’t know the WIC usage and waste ink pad saturation.

However, as much as I want to tear into Epson they’re no worse then HP with the dynamic security printers, which is a way to progressively block 3rd party ink over time. The difference with HP is that they DO allow you to use the printer with the original chip, while Epson straight up disables it - HP only cares in terms of the warranty for the most part. Eventually the clone chips bypass the dynamic security, but you can never update the firmware if you can absolutely avoid it. At least HP is honest unlike Epson. HP also has Cartridge Protection, which “locks” the chip to that printer so you usually need to kill that before installing the ink if at all possible or burn the first set and turn it off.

Lexmark was also guilty with the 100 series printers. They used RFID chips and forced you to replace the ink with those printers once it ran out, especially with the single use return cartridges. You could replace the chip and use them again, but Lexmark is/was very sue happy if you try and reuse a “return program” cartridge. They also make it quite a pain to do.

All of these inkjet printers clog, but Epson is the worst of them all. You can fix it on most Canon models as long as the head is modular (not on all models), so they get a pass (somewhat). It’s usually the low, low end CLI models with fixed heads. However, they kept it modular on the higher end ones.

On the more current 564/901 HP models, HP generally integrates the head and needs setup carts to use the printer again - and you probably no longer have them so you can no longer use it once you lose the initial calibration. You need a wide body HP 95X/96X printer (OfficeJet Pro) for a user serviceable printhead with HP today.

Brilliant, this worked for me on my epson xp312, thank you for helping :)

Another simple thing we sometimes forget to do is update the drivers and software that runs the printer. That’s what ended up working for me. Good idea to do that first! Could be the easy fix you’re looking for.

My Xp-410 just stopped printing any visible marks whatsoever on the paper.

I confirmed printheads functional but no ink on paper. Did a reset except for the network settings and printer regained functionality. Bizarre!

I took it out again shake the cartridge and put it back on and start.

Mai YiLim enjoyed your answer i aske thoo what happened?? youtook out cartrideg shook it put it back in and start. and that is the end.. did it work??? help . byron

I had similar problems with adding new ink cartridges not working but as someone suggested previously, ( and it’s not mentioned in the instructions) if you pull off the small round clear plastic on each nozzle, it allows the ink to get in !