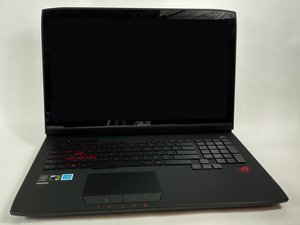 The ASUS ROG G751 gaming laptop. Powered by the quad-core Intel Core i7 processor and NVIDIA GeForce GTX 965M graphics card with TurboMaster. This Laptop comes with dual fans, copper heat sinks and a 17.3 IPS anti-glare display. The Republic of Gamers mask logo is located on the back of the screen in red.

ASUS ROG G751jy Switches between battery and AC. Turns off if stressed

Thanks alot for your reply. You gave me new hope and I've been downloading every monitor there is. GPU-z logs the GPU, but I couldnt find a program that logs the CPU in a file so I can look at it later? Only the .CSV file to HWiNFO, which I couldnt find a way to read :O.

From my first test run, I tried to play Company of Heroes 2 on the lowest settings. Today it only flickers to battery sometimes. Here is a GPU-z sensor log from when it happens. You can see at the 30 second mark I alt-TAB into the game, and it changes to battery for 4 seconds. As you can see from the picture below, the GPU memory clock changes, as well as the PerfCap. (Note: this flickering to battery happened in the game maybe 5 times in a period of 10 minutes, and also in Windows when I am opening folders and Chrome.)

So I tried Heroes of the Storm with high graphics, and the laptop shut off after a few minutes in game. Actually it shut of while we were loading into the game (after the hero select and the menues). As you can see, the GPU Load [%] , Memory Controller Load [%] is very low right before the shut down, because there werent much graphics, only the load screen.

One more thing to note is that when I boot up the laptop again, I can clearly see that it stays on battery for a few seconds during the ROG logo (before windows boots). I can see this because I have 100% brightness on battery and 0% on AC. (When I tried to boot without the battery yesterday, it wouldn't even boot into windows).

Heroes of the storm with lowest graphics. 30 minutes in-game, with actual gameplay and no shut downs. Changes to battery approximately once a minute for two seconds.

At about 28 minutes it changed to battery, and didn't change back. I turned off the computer manually and when I was back in windows, it recognized the AC again.

Since I am not able to view .CSV files, the only thing I notice from the GPU-z logs are the GPU Memory Clock changing to 799.8 and the PerfCap Reason to 1 during the AC disconnect.

So with FurMark there isnt much to say, I run it, and it shuts down before the graphics appear.

I have the exact same problem with my G751JY. After three months trying to find a solution, I have no clue. Seems it is related to motherboard. For any reason, the AC can't deliver enough power for the GPU, and it reverts to battery. I even ordered a new power brick, but that's not the cause.

I am getting basically the same issue with my G751JY. Did either of you @cpharlok or @ronnyz figure it out?

This truly sounds like the battery connection is not doing so well. I would check out the connection to the battery. If not, it could also be overheating. I would check your temperatures, for laptops you dont really want to see much more than 75-80c at the worst. Check the temperature profile, when youre gaming the temperatures will have a small-ish spike and slowly increase from there until it reaches equilibrium, if your temperatures just skyrocket you may have a thermal paste issue which will require you taking apart your machine and re applying thermal paste.

Let me know how it goes!

Don't know the answer but have you checked that the laptop has got the latest BIOS version 213, 2019/06/25 installed? It mentions “optimize system performance”