Which SSD disk is compatible with Mac Mini Mid 2010

I would like to replace the original hard disk for a SSD.

I have found the following SSDs and would like to know if they are compatible. I have phoned Samsung but they referred me to Apple.

Is there also an instruction available how to replace the disk?

Here’s the IFIXIT guide you’ll need to follow to swap out your drives: Mac mini Mid 2010 Hard Drive Replacement. At Step 21 you’ll need to take the thermal sensor off, use extreme care! As its very easy to break. Transfer it to your SSD in the same location. Do take the time to read some of the comments before you start.

I’m not sure I understand you listing out the different drive sizes its upto you what your needs are. Depending on which version of system (2010 Mac Mini’s (Macmini4,1) you do have a second choice. As an option you can add in a second drive using this kit: Installing Mac mini Mid 2010 Dual Drive replacing your optical drive. Or, if you have the server version then this kit: Mac mini Dual Drive Kit

That way you can keep your current drive and then after installing your MacOS onto the SSD as well as your User accounts & Apps switch the boot drive over to your new SSD. Leaving your HD as the data drive for your stuff. That way you can reduce the size of the SSD you need.

I ordered the SSD

Rubber cement is mentioned. What is it and do I need it for the thermal sensor?

Where do you see rubber cement stated? Are you sure you didn't mis-read rubber grommet.

OK, I think I see where you see that. That was someones note. No, you don't need rubber cement. There is some sticky tape wrapped around the wires. Just don't over handle the stick parts and you'll be fine.

I received the disk and have started. But I am stuck at 12 One 26 mm T6 Torx standoff don't know how to remove it. Don't have the correct tool or something. And there it looks like there is not enough space to remove the disk. Hmm what to do...

The original system drive (5400rpm 320GB drive Toshiba MK3255GSX from apple) has been running really slow, like 4-10 MB/s read/write speeds. The link speed has also negotiated at 1.5Gbps so maybe even though the Toshiba MK3255GSX is Sata 2.0 there might be a bad cable. 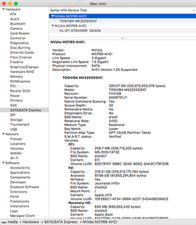 I installed the Samsung 860 EVO and booted off a High Sierra USB, and the disk utility can’t even see the SSD :(

I’ve re-seated the cables, but nothing.

Put the original drive back in and the system booted up fine, but is still super slow and negotiated to SATA 1.0 link speed.

I’ve read all the other comments from Dan about swapping SATA cables; but I can only find “original” SATA cables for my SATA 2.0 capable chipset (based upon the screenshot 3Gbps link speed listed).

If I’m going to find a correct cable for the default HDD on the Mac Mini Mid 2010, which one is it - that will work with my SATAIII drive (that link negotiates as per Samsung Spec) on a SATA 2.0 controller?

So far - no working Samsung 860 EVO on my Mac Mini Mid 2010; and looking into firmware updates but it’s not so simple when the Mac Mini is my only machine with the Optical Drive.

Edit 27 Oct 2019: after replacing the SATA Cable with a SATA3 one specced for a Mac Mini 2012, diskutil command line showed the SSD, and then it was able to be formatted by Disk Utility and a restore of time machine kicked off.

Maybe it's just like the issue on the MBP2010's where someone needed to swap the SATA cable from that model for the cable from the 2012 model like @danj has posted in numerous other answers and comments:

Will the Samsung EVO 860 SATA III SSD drive work in my system?

I have a feeling since my original MacMini HDD is negotiated at SATAI link speed, the cable can only handle that. Thus I reckon the Samsung 860 EVO tries to negotiate at SATAII which the chipset can handle, but the cable isn't up to it.

This MIGHT mean I should use a replacement SATA Cable from the newer Mac mini models, instead of just replacing the original with like for like incase it's damaged (which it may or may not be) as they supported SATAIII (6Gbps): https://everymac.com/systems/apple/mac_m...

Given the fixit one is out of Stock I ordered this one which is same size as the Mac Mini Mid 2010 lower HDD and same connector orientation, and specced for the Mini 2011 and 2012 (Sata 3.0):

The cable arrived. Installed, and booted into the 10.13 bootable install USB and checked Disk Utility. Drive Not there :(

So I tried terminal, and:

Launching Disk Utility again the Samsung 860 EVO SSD was now listed, and could be erased and partitioned.

Looks like the Mac Mini 2012 SATA Cable did the trick.

I had change the optical drive with an SSD M4, on my Mac Mini 2010. I kept the original HDD for storage drive, as the SSD is only 256gb.

To be honest I didn’t notice any difference, I was hoping Mac mini has a huge difference. well that was about 3-4 years ago. Now I’m thinking to replace the SSD with an Samsung Evo860 1TB. it worth the risk? I mean I read that the Evo860 is faster than the M4, which is very old model, but I will any extra cable for doing that?

I will put the new SSD to optical drive. Is any difference if I put the SSD on optical drive or on HDD original place?

Hi guys! I'm trying to restore my old Mac Mini Mid 2010 and the SATA cable is damaged and I searched for an original replacement but I couldn’t find it. Can I buy a Mac Mini 2012 SATA cable and connect an HDD without problems? I just want to be sure. Thanks!