Hey guys, so i got a battery from iFixit and soon after i replaced it i began to get random shutdowns, the mac was running incredibly slow.

Had to reset the SMC in order for it to work properly again.

The second one gets here, i replace it and it got even worse, way worse… every 10-20 min. i get shutdowns.

So luckily i kept my original battery which is at 1300 cycles and swapped it just to make sure my mac runs fine with it.

Three days have passed since and i have no issues. 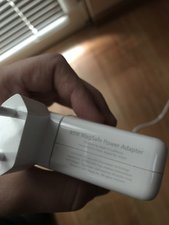 Please tell us about this "A Data SSD and your WD black) set up. Also did these problems begin after you installed Mojave?

Mojave is installed on the SSD (A Data SU800), the hdd i use for storage.

No, i've been using Mojave for the past two months or so.

I've been trying to figure out how to fix this battery issue for the past two weeks.

Lets get a bit more info on the battery and the charging logic. Install this gem of an app CoconutBattery take a snapshot of main window with the MagSafe plugged in and a second one with it disconnected. Post both here for us to see Adding images to an existing question

I would also recommend you review this Apple T/N to make sure the MagSafe adapter is the correct one as well as the cable & connections are good Apple Portables: Troubleshooting MagSafe adapters.

I just shipped both batteries back.

The power adapter is the correct one because i bought it two months ago, mines cable was starting to wear quite badly.

I did use CoconutBattery and i dont think i saw anything suspicious.

After a shutdown i booted up the MBP & opened up CoconutBattery just to check if it shows anything under “battery failure” but it never did. Battery status was always “good” if i recall correctly, cycles was at 0 obviously, manufacture date was like in the past 3-6 months.

Can you please post the snapshots I asked for. Lets see what I can glean out of the info. I might surprise you ;-}

I have my original battery installed, you still want a screenshot ?

I forgot to mention but the shutdowns only happen when the MBP is on battery (not charging).

However sometimes when it is charging the screen goes black and my music stops, after a couple of seconds it resumes (so does the music and the screen flickers) just for a second or two and it goes back to being a black screen, yet its still running (the fans are spinning) and i have to shut it off holding the power button.

Well i received the third battery from iFixit and its still the same, though it happens more rarely with this one... haha :(

I also have a 15" 2012 Mbp shutting down randomly, and which shows one error in ASD SE150 test, pertaining to the ATV table test for the battery, "programmed charge table not in use". This Mbp shuts down randomly every now and then, without giving any error report or kernel panic notification. I know that a funky battery can render havoc, so I now will run it with another battery, which passes the ATV charge table test. This appears to be common issue with aftermarket batteries.