Replaced battery (purchased here) several days ago. Was careful to power the laptop initially with a low power source before I turned it back on. Once on, I let it drain to 0 and shut down on its own, then turned it back on and charged it up to 100. Shut it down after that and put the computer away, thinking I was done with the repair.

Today (several days after putting the laptop away, thinking it was fixed), when I turned the laptop on, battery shows either 0 or 1%, will immediately shut down if unplugged. Power source is confirmed as reliable as I use it on another MacBook that uses USB C.

My initial response was to try resetting the SMC and NVRAM, which I think I did successfully, but I have no idea of how to determine if the 'reset' commands took.

Anyhow, after that, I just let the computer sit, powered on and plugged in, and it is still showing 1%. When I click on battery at the top of the screen it says 'service recommended' and 'battery is not charging'.

I have heard on similar posts that the charging logic within the logic board may be at fault. I am curious if this sounds like one of those cases, even with what appeared to be a successful charging of the battery after the initial repair was complete? 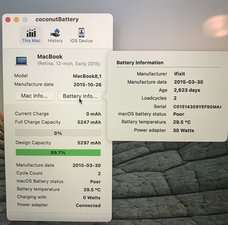 @mc01 - Let’s get a better view of things, install this gem of an app! CoconutBattery take a snapshot of the apps main window and post it here for us to see Adding images to an existing question

After receiving a 2nd battery from ifixit (1st was warrantied, thank you), everything is now working fine.

Thanks very much to everyone who helped me out along the way!

Try resetting the SMC with it plugged in. 1 Shut down the MacBook. 2 Hold Down Option + Shift + Control all together at the same time for 10 seconds then release the keys. 3 Tuen on the MacBook. If it still doesn’t turn on leave it unplugged for about a week. Then try plugging it in and let it charge for a couple hours. Then try turning it on again.

Why do you think resetting the SMC would effect this condition and why would you tell someone to leave the system for a week needlessly.

The key is asking what is the color of the MagSafe charger LED. If its Orange then it's trying to charge. If its green then the charging logic is having a problem.

But given the fact the system is running from the charger we know power is getting to the system. So the issue is really focused on the battery its self, hence we need to see what the battery tells us. I find CoconutBattery is a easy and quick tool to tell us what gives.

Hi Cameron, really appreciate your help here. I am happy to take the time to try anything that may work. To recap, I have already reset the SMC/NVRAM/PRAM, and that does not seem to help.

Hi Dan, just wanted to clarify I'm using a USB C cable, so no orange/green indicator to see, but I can confirm like you're saying that if I leave the computer plugged in, I could conceivably run it forever no problem, it would just stay at 1% charge and immediately die if I accidentally unplug it.

You may have noticed from my coconut screenshot that the battery, purchased from Ifixit, was manufactured in 2015. Does this support something wrong with the battery as well, given that there could be a shelf life issue here?

Thanks to both of you for taking the time to help. All of the suggestions are great and I'm looking forward to trying everything I can to get this resolved :)

@mc01 @danj If it's a battery problem that I can get solved, please tag me!!

@amber - Just coming back to this Q. now with CoconutBattery we appear to have old battery info present in SMC. It looks like it didn't clear out the older battery info given the date is about the same of system production. I don't deal with MacBooks that often so I'm a bit unsure what the best way to reset SMC fully.

Whats odd is it did pick up the battery is from iFixit. We can also see the charger is not charging the battery - Charging with 0 Watts and Power adapter is Connected! So this could be a micro-controller issue or it could be something within the logic board charging logic.

@mc01 - Yes your right, I had MagSafe on my mind. Apple makes it harder to see if the charger is properly working with the USB-C power connection. I find using a USB-C power meter helpful USB-C Power Meter.

At this point you might want to check the USB-C cable make sure its the Apple version as some others don't offer the full wired connection needed here.

It is indeed the original Apple branded cable and charging block. The same ones I also used to charge up the new battery a few weeks ago.

You may recall that this battery appeared to take a full charge after the initial replacement, but a few days later was at 0 percent when I started the system back up. I'm really struggling to understand what suddenly happened to the system. I can't imagine that any of the connections I made during the replacement were suddenly compromised. Also, if it was a battery that was draining slowly, I would think that it would at least go back up to 100 (or something close to that) Again, even if it quickly died after. I'm also curious about the logic board being damaged during install with excessive voltage (even though I believe I prevented that from happening), but wouldn't it have been damaged immediately and not allowed to go to 100 on even the initial charge?

Is the charging circuit on the logic board? I'm starting to wonder if just buying a new logic board and replacing it could be worthwhile. It appears to be basically 2/3 of the steps I already did to replace the battery. Not typically interested in throwing solutions at problems without more information, but curious if you think that we are getting to this stage?

Anyone else on this forum that you think may have seen this problem with macbooks before? I only ask since you indicated that you don't focus on macbooks. Not to take away from any of the great assistance you've already given, hope you understand my inquiry.

@amber Hi Amber, would it make sense that the battery I purchased from ifixit could have had a manufacture date of 2015? I purchased it about a month ago at this point.

It sure is strange how it did charge then stopped isn’t it!

Best rule of thumb is first diagnose the problem before offering a solution. I would get a firm grasp on what is the state of the battery which CoconutBattery will tell us using the free version is enough.

Thanks for the feedback

I will remember to do that for next time

You are 100% correct though

Thanks Dan and HelloMacOS - for what it is worth, booting into safe mode does not help. I will hold off on opening up the computer again and cleaning any contacts until Dan gets a chance to let me know what he thinks from the coconut screenshot. I really appreciate all the help here.

Please do not hesitate to ask any questions