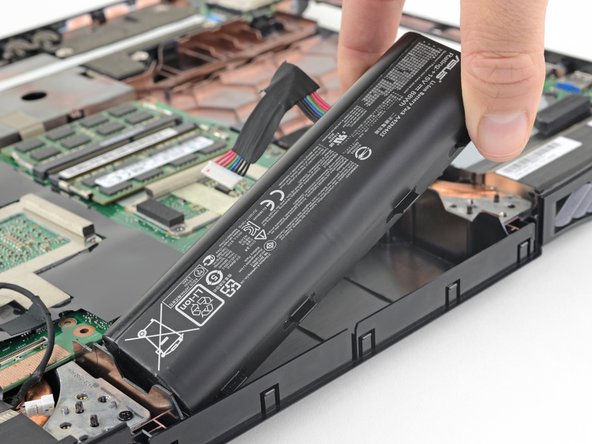 Use this guide to repair or replace a dead or worn out battery in an Asus ROG G751JL.

A few steps in this guide are in the wrong order. Could get confusing for and unexperienced technician. Steps 10 - 12 should be before step 6. Other than that this was a very good guide.

Good catch! This guide was made by combining a few other guides ( we call prerequisite guides) and they were combined in the wrong order. I went ahead and fixed it. Thanks for the feedback!

This guide skips a very important step, without which the laptop is unable to connect to wifi networks at any reasonable range. You must reconnect the two cables on the left side of the monitor to the wifi chip. These must be in the order of white toward the monitor, black away from the monitor. I have taken pictures I would be happy to share for this step. Please contact me so I can share these pictures to remedy this oversight

Still not added,! Also the removal of three tiny screws under the lip of the CD Bay is completely unnecessary and they are very very difficult to put back in.

Was able to complete with little issue thanks to this guide! I did, however, run into one problem: After the battery is unscrewed, it still has small tabs to lock it into place on either side. In the pictures, it comes right out with no issue but mine was caught pretty well where the circuit board extends down. It took a nerve-wracking amount of careful prying to finally get the battery tabs clear of the silicon. Still highly doable, and this was extremely helpful!