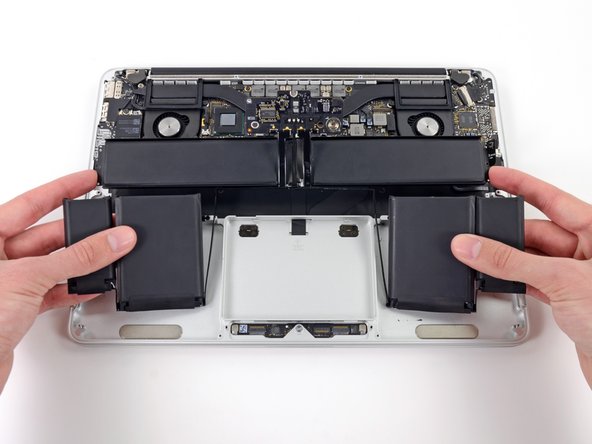 If you're using the old-style iFixit adhesive remover with separate bottle and syringe (no longer sold), click here for a slightly modified set of instructions.

Followed this guide step by step. Very comprehensive and accurate. I would never have dared disconnect the speakers if this guide didn't show me how.

One point though. The lower left and right speaker screws had some metallic sponge on top of them. I wouldn't have known there were screws underneath.

Excellent guide. I'm a repair technician who works on both PCs and Macs. This was my first rMBP battery replacement and I wasn't sure what to expect. For those experienced with electronics repairs, I'd say this is a relatively easy repair with the exception of releasing the adhesive which holds the battery cells to the case. I was eventually able to do it with a spudger and some elbow grease, but I was worried at times that I was going to puncture the battery. Apple really needs to dial back the strength of adhesive they use for these applications. They are clearly making it as difficult as possible for the average user to attempt, which IMO may end up costing them well informed and thoughtful customers. This setup is similar to the iPhone 6 battery (which I actually did puncture with a spudger the first time I removed one) albeit more involved to remove. In the case of the iPhone, a few minutes on the hot plate loosens it right up but this isn't really feasible in the case of the rMBP.

Thanks for this guide, I had a faulty battery and replacement by apple would be 400 euro. Now I did it myself with a replica battery for 80 euro.

Tip on prying loose the battery at step 24 and on: Use an old credit card. That worked very well for me.

I recommend to skip step 14 ( pry the left speaker cable connector up off from its socket on the logic board). The risk of damaging the socket is very high. There is even a warning in this guide (Be sure you are prying up on the connector, not the socket itself!).

Proceed from 13 to 15 and 16 to remove the right speaker. Still with the connector in place you can put the speaker a bit aside and have enough room to remove the battery packs in the steps later.

Same for left speaker and its connector cable (step 18).

Hint by @roelofk with old credit card is very helpful.