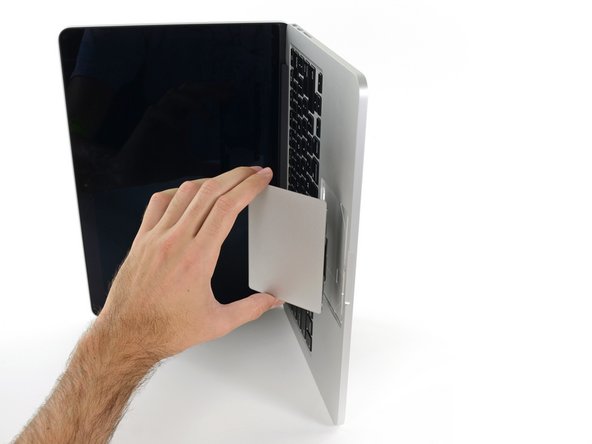 Use this guide to replace the trackpad. This procedure involves using adhesive remover to remove the battery. Do not reuse the battery after it has been removed, as doing so is a potential safety hazard. Replace it with a new battery.

No need at all to do all of this. Unless your ribbon cable is dead. Otherwise just pull up the SSD and that's it. Took 1mn30 to do..

Figured that out- remove the top battery! Sorry - didn't read through all the directions carefully!

This can be done without removing the battery. The touchpad ribbon cable can be disconnected on the logic board, then snaked (gently!!) back out its channel with the battery in place.

It won't thread back through when replacing the touchpad though - it's not stiff enough. Instead, cut a strip of material from a manila folder and thread that through the channel under the battery. Then use masking tape to attach the touchpad cable to the manila strip and pull the strip out towards the logic board. The touchpad ribbon threads through the channel and the masking tape can be removed once it's in place.

I agree with the last comment. But I would prefer loosening the center battery and lifting it up to guide the trackpad cable easily. This also makes it easier to reinsert it into the connector during reassembly.