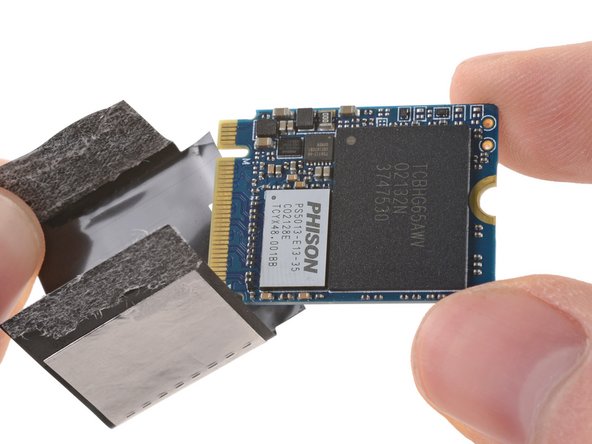 A manufacturer provided iFixit with this device or component.

Use this guide to replace the SSD in your Steam Deck.

Before you begin, completely power down and unplug all cables from your Steam Deck. Remember to follow general electrostatic discharge (ESD) safety procedures while repairing the device.

These steps only describe how to physically remove and replace your SSD. You will need additional software tools and procedures to install an OS and get the replacement SSD to function as intended.

I think it has to do with power draw... The Steam Deck isn't designed to cope with a incredibly fast (and power hungry) 2280 drive. I learned this the hard way on my laptop. I changed the drive myself to a 5500MB/s one and I could tell that not only did the SSD run hotter but also the components surrounding the SSD, it completely changed the thermal characteristics of the device. I added this drive to my desktop computer instead and bought a low powered one for the laptop. By having a 2230 drive on the Steam Deck, Valve forces users to choose drives that are typically designed for small and low powered devices.

and possibly even a m.2 door/cover to allow easier m.2 ssd removal W/O having to disassemble our steam deck! if the battery needs unplugged then a battery "KILLSWITCH" or "BATTERY DISCONNECT" Switch be also added to the decks after market backplate/cover to allow the steam decks battery to be disconnected from the unit with a toggle of a switch? allows for safter disassembly and m.2 SSD replacement with out having to repeatedly disassemble the steam deck....(SSD nand flash memory can fail) if i had the tools and capabilities to do this myself i would/ but i still dont even have my steam deck yet (Q3 July -Sept. 2022 ;( my friend just got his (ordered on same day) so WTF is mine valve!?????

It's already incredibly impressive that the Deck does what it does, at its price point, with its form factor. It'd be even bigger with any other physical features like that.

The unit isn't necessarily designed with modularity in mind, at least not first and foremost. People aren't "supposed" to be replacing these according to Valve; if that were the case then the internals would have to be shifted around quite a bit to ensure that people wouldn't be able to break stuff when they swap drives/etc. Although this is a very easy repair, people will inevitably mess it up. Valve doesn't want to have to replace everyone's devices if they destroy the internals on their own volition.

The fact that the SSD replacement process is this easy, and it doesn't instantly void your warranty, is amazing. Very few companies have this type of policy with hardware of this nature. A handheld device with fully upgrade-able storage to this extent has been neigh unheard of until now.