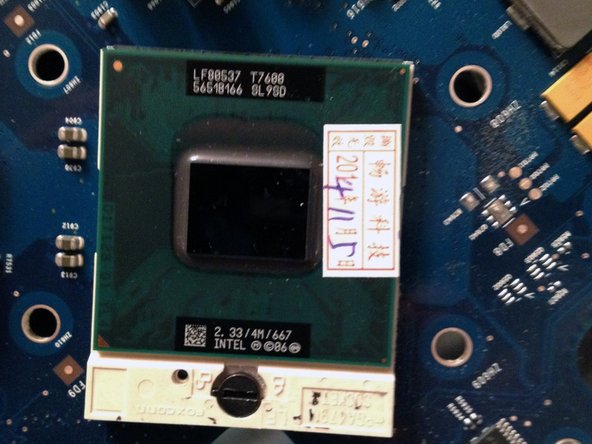 Here are detailed instructions showing how to turn your iMac 4,1 into an iMac 5,1. I'm filling in some gaps in this procedure for upgrading a 2006 iMac.

I replaced the Core Duo T2600 CPU in my iMac4,1 with a Core 2 Duo T7600, which is the fastest replacement CPU for this iMac. I bought the replacement CPU on eBay for $25.89 from an overseas seller. The price was right but it took almost a month for the CPU to show up in my mailbox.

After replacing the CPU and updating the firmware, the resulting computer is equivalent to an iMac 5,1. It is now possible to install 4 GB of RAM, though the computer can only address 3 GB.

The best reason for upgrading the CPU is to be able to install MacOS X 10.7 Lion. This is surprisingly tricky to do.

So I basically performed this: https://www.tekrevue.com/stayin-alive-up...

EXCEPT it does NOT boot with the new CPU in it. It is already an iMac 5,1 with the newer Firmware and already recognizes the 4GB of RAM and already has the latest Firmware version as well from Apple. It boots with 10.9.5 on a SSD with all the modified kexts etc. everything works based on what it can do. the CPU is the ONLY variable that causes problems. There is NO boot chime, the fans spin up super fast and loud. There is also NO screen display as well. Attempting to do CMD+OPT+P+R has no effect with the newer T7600 2.33 installed. I even swapped out the RAM module between single installs 1 at a time and in different banks, no change. And I only get 2/3 LED 1&2 of the lights that come on not LED 3. But it does come on with the original CPU. Any thoughts would be greatly appreciated, thanks.

My only experience is with EMC2105, not EMC2118 (I inherited EMC2118 from an existing guide that I leveraged). I wonder what would happen if you downgraded your firmware to an iMac 4,1 and then performed the CPU upgrade procedure. That might work if the firmware installer detects the CPU and does some CPU-specific setup. On the other hand, that would be risky as it might brick your system. I’d probably just live with the slightly slower original iMac 5,1 CPU (T7400 at 2.16 GHz) unless you feel lucky or want to contribute to the collective knowledge.

Will the SSD work with this model instead of original HDD?

Yes, an SSD will work. There’s even a repair guide (authored by someone else) explaining how to install a new hard drive or SSD. iMac Intel 20" EMC 2105 and 2118 Hard Drive Replacement