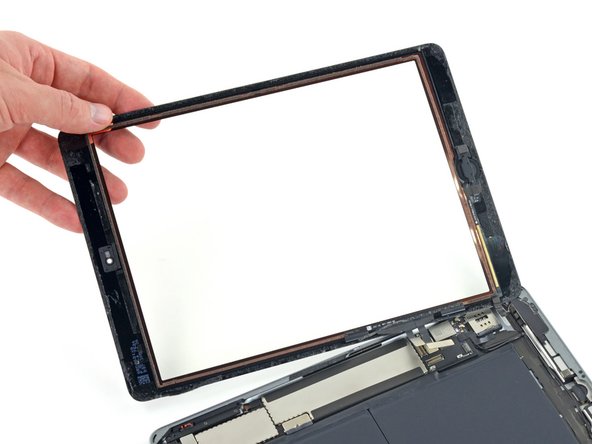 Definitely not for the weak of heart, especially if your screen lost all its integrity when it shattered. You'll be scraping glass splinters off the frame for an hour. Tip: Make sure to scrape off all the black adhesive from the frame of the iPad (and I mean every speck) before putting the new screen down. I apparently missed a spot, and I can't get the screen to seat perfectly within the frame (but close enough; I'm not going back in there). Also, I didn't have much luck with the microwavable tube for softening the adhesive, but I was fortunate to have a heat gun that helped quite a bit.

I love the ifixit guides and this one is up to their consistently high standards, have to concur with the previous comment though, if your customer brings you a completely trashed digitizer a good number of the steps become obsolete and its down to brute force to remove the adhesive even if you've taped the screen, picks become redundant. One piece of advice that could be incorporated is if the digitizer is beyond repair, just cut the ribbon and be done with it, opening a trashed screen 'like a book' is not necessary, otherwise spot on guys and thanks for making my day easier!

I agree with the previous two comments—this guide (or a separate one) should be changed to show to replace a cracked/shattered digitizer. I quickly learned that using the picks was a lost cause and following the guide was near pointless until I got to removing the display.

Pro-tip: don't even bother with the heat gun if the digitizer is shattered. Take the iPad outside, put on a pair of goggles, and just wedge a spudger/tweezers between the adhesive and the glass. Don't worry about damaging the home button or cables, your replacement digitizer probably has them pre-installed...just worry about the camera and not nicking the display. It's going to make a huge mess, but that's why you're outside. Heat it if you want, but I didn't find it necessary.

Before you proceed with this — especially if your digitizer is shattered — read through the comments under each step for some helpful hints. Also, one thing that isn't mentioned: DO NOT ATTEMPT TO CLEAN THE INSIDE OF THE DIGITIZER AFTER YOU REMOVE THE PROTECTIVE FILM. From what I can tell, only the outside of the digitizer is made of gorilla glass, and the inside will lightly scratch no matter how soft and clean your cleaning cloth is.

I found the guide easy to follow, I completed the repair in half an hour. I found the repair easy to complete BUT i recommend that you use a heat gun over the iOpener tool, as the heat gun is more affective at softening the adhesive making it easier to pull out the little shards of glass. I recommend you update your guide to show a realistic repair with an iPad with a horribly cracked screen.