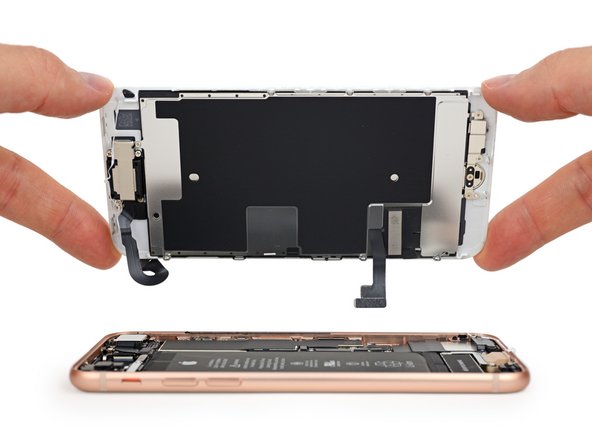 Learn how to replace your iPhone 8 screen. This part comes with the front facing camera, earpiece speaker, and EMI shield already installed, making for an easier repair.

All you need to do is remove the old screen and transfer the home button to the new screen, in order for Touch ID to function.

Note: If your iPhone’s auto brightness feature does not work properly after your screen repair, make sure your iPhone is updated to iOS 12. True Tone functionality is disabled after a screen replacement, even when using an original Apple screen.

Repair didn’t go as planned? Check out our iPhone 8 Answers community for troubleshooting help. Or if you’re in the market for a new device, consider getting a refurbished iPhone 8 from our friends at Backmarket!

Repair didn’t go as planned? Check out our iPhone 8 Answers community for troubleshooting help. Or if you’re in the market for a new device, consider getting a refurbished iPhone 8 from our friends at Backmarket!

And do you just wing it for the front camera, proximity sensor etc ?

wait a second… Are you saying that when we change the screen it is also necessary to change the front camera?

@eitantonius A lot of new screens come with a replacement front camera already installed. They cost a bit more, but make the job easier. You can save a few bucks if you buy a stripped-down display, but you’ll need to go through some additional steps to transfer the original front camera (and a few other components) from your broken screen to the new one.

yes, but it is almost impossible. it involves removing the actual glass from the back housing, and the entire backside has a strong adhesive. Its recommended not to do that as it can result in either cutting yourself, or damaging the wireless charging coil thats found behind the glass.

Is there any update on the ambient light sensor yet? Is it working with the new beta version of IOS12? I would be delighted to hear about it.

Auto Brightness works on all versions of iOS 12 that we’ve tried. True Tone does not. However, if you have your original display, there’s a fairly inexpensive (~$75 USD) device that can clone the data from the original display to the new one and restore True Tone. They’ve been around for a while and most repair shops should have one by now.

any idea when the guide for full replacement will be available?

Replaced screen a success now it is stuck on a boot loop….. help please.

Boot loop can be caused by bad proximity sensor, which is moved to the new screen from the old. Or if you got one that came with it, it may be defective.

So, the original screen has these three tabs that slide in the recesses in the top of the phone case, all your pictures show only the aftermarket screens with two aluminum rectangulars (at the top of the screen). Isn’t that going to possibly cause the screen to pop out eventually (if the adhesive fails for say) since there is nothing physically holding it in place?

There are no aftermarket parts shown in this guide—that’s an original Apple display on a brand-new iPhone. You might be thinking of a different model? But to answer your question, yes, if the clips aren’t secured correctly then there’s a chance of the screen coming loose at the top.

Will Touch ID work after the repair? That is my only concern about the repair.

As stated at the top, it will work fine provided you are careful to transfer the original home button to your new screen, without damaging it.

Why is the Lower Display Cable Bracket on the parts list?

Hi Michael! The lower cable bracket is accessible during this guide and has no specific guide of its own. If you were replacing that component you would need to use this guide. The bracket is not required for a screen replacement or subsequent replacement guide.

Used the iFixit screen replacement parts and this guide. Guide was spot on and replacement screen weeks perfectly! Thanks for the guide!

One of the pressure connectors seems to get dirty or dommed, for not pressing the sides as advised. I have to do

There should be an advisory to be careful when unscrewing the very first screws—mine stripped very quickly and easily. One failed attempt and getting that screw out is nearly impossible.

Hello, is the replacement camera the same quality as the original? And if not, would it be difficult to get this kit and swap my original camera over? Thank you.

My screen is cracked and chipping away in places. It is leaking black ink over most of the top left corner of the screen. Would this repair be able to fix that?

Yes, this repair will make the screen new again! If this damage is due to a serious drop, you may need to fix some other things—the frame may be slightly warped, or other components may be damaged.

When replacing the display, you purchase (or part of your purchase) a “iPhone 8/SE 2020 Display Assembly Adhesive “ kit, but there are no instructions (even in the kit) on how to apply it.

Hello! The link on how to reapply the adhesive is actually in the conclusion section of this guide. Here is a quick link!

Great instructions! Worked well for both disassembly and assembly. Thanks!