On checking voltage with a simple volt meter, it shows a good 12v to 16v depending on light hitting the panel.

If I directly connect a 12v LED light, it powers it fine, light comes on no problem.

If I connect the panel to my Charge controller for charging a battery, it reads NO AMPS and will not charge the battery.

This was with a cheap PWM charge controller, so I replaced that.

I now have an expensive EPEVER MPPT Solar Charge Controller 20A (TRIRON 2210N). This is a beautiful device, it shows watts, volts, amps etc on the display.

The indicator light for the pv shows its not active, not charging, but is connected.

Seems to indicate an issue with the panel maybe having a wiring issue or short (the indicator light is not on at all (should be green solid or green flashing to indicate connected ok and working or connected but not charging).

If that was the case, why would the panel power an LED light fine directly connected?

Would that not need some amps/watts to power it? How would it power the light if it was shorted?

I tried the same with the other panel, again shows volts but no amps. Powers an LED light directly without a problem (obviously not a great idea to power the light directly but I needed to test it somehow).

The panels are from separate providers, so they are not a bad batch as far as I can tell.

Good to hear that it helped.

Yorum: I'd like to thank you for the work you put into...

A unique aspect of this BiPAP device is its...

I'd like to thank you for the work you put into writing this.

Yorum: Where is the fuse for heating? My microwave...

Press the “Off/Clear’ button to cancel anything on the display, and reset the microwave. This is a soft reset and will simply get you out of any program you have started. Press it when the cooking complete reminder appears on the display, for example, and the “Your Food is Ready" message will disappear.

Press the “Off/Clear’ button for three seconds to turn the “Control Locked” child lock off.

Reset the cooking program if “Off/Clear” was pressed accidentally. For example, press the “Defrost” button again, and turn the dial to select the defrost time you want again. Press "Start."

Reset the time of day. Press the “Clock” button, and turn the dial to set the hours. Press the dial to enter. Follow the same procedure for the minutes and a.m. or p.m. Press the “Start” button to start the clock.

Where is the fuse for heating? My microwave runs but will not cook.

I changed the battery of 21 MacBook Pro 2017. On one machine, the keyboard no longer works (worked before keyboard change). Any idea what I can check?

I checked the cables (not knowing which one is the keyboard one) and it doesn't seem to me that there is one that is not connected or secured.

There are other things too: 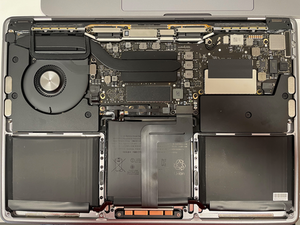 The System Management Controller (SMC) may have a problem.

There may be a problem with the power management system.

Yorum: @ozueun You may have to access a PC so that you...

Try connecting an external monitor (TV?) to the laptop's HDMI port and check if it is turning on but just with no laptop display. Press Fn + F8 (both together) to toggle the display between the laptop only, external monitor only or both on together.

If there is a display on the external monitor there's a backlight problem with the laptop's display.

If you can't connect to a monitor then try shining a flashlight at an angle close to the laptop screen and check for any images.

They will be very faint if they are there so trying in a darkened room may help to see them.

You may have to access a PC so that you can try the BIOS recovery method as outlined in the link you posted.

Most libraries have a PC that allows public access ;-)

Gönderi: "Why is my phone on SOS only?" için yanıt

Why is my phone on SOS only?

I cant call, it always says SOS only everytime i try to call somebody

3.5mm jack broke off and is now stuck

I (stupidly) used a cheap 3.5mm extension cable and the jack broke off inside my Lenovo Y50-70. Does anyone have an idea how to get it out? Or would I have to replace the entire audio IO part?

Gönderi: "Why won’t my vivoactive connect to my phone with...

Why won’t my vivoactive connect to my phone with bluetooth?

My Vivoactive won't pair with my phone via bluetooth

Kanye West merch shop real collection. Get UPTO 50% OFF on Hoodies and Shirts on official clothing line store. Shipping around the world.

Gönderi: "When the drum is spinning it makes a loud banging...

When the drum is spinning it makes a loud banging noise?

I have a Haier 7kg Washing Machine front loader. Makes loud banging noise when it's spinning. And when its empty. The drum it all loose and wobbly so can anyone help me. Please.

My Indesit(Mod no - XWE 81283) is deafening loud banging noise ,dish hitting the wall of washing machine only when spinning,washes normal . Plz give me a solution.

Gönderi: "Why won’t my vivoactive connect to my phone with...

Why won’t my vivoactive connect to my phone with bluetooth?

My Vivoactive won't pair with my phone via bluetooth

Kanye West merch shop real collection. Get UPTO 50% OFF on Hoodies and Shirts on official clothing line store. Shipping around the world.