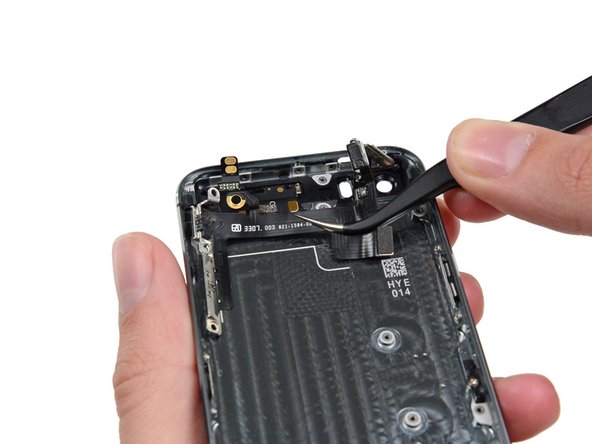 Use this guide to replace the upper component cable containing the flash, microphone, and sleep/power button cable of an iPhone 5s.

You can also use this guide to replace the logic board antenna bracket and contact clip.

Instructions at link for these parts says they are "visible in steps 53 through 56 of the Upper Component Cable Replacement guide". Not quite right.

- Steps 56 & 57 show removal of the Logic Board Grounding Bracket, but instructions call it the “logic board antenna bracket”. Screw that goes through the logic board into this is marked in red on step 30.

- “Small metal contact beneath logic board” referred to in Step 30 goes under the Logic Board Grounding Bracket. See also Step 34.

Great guide. Be careful that the silence button is workable before reassembling everything. It is easy to think the switch is in place when it really isn’t. Also, be careful when adhering the new cable to the housing as accurate alignment is essential for the cable to not have a significant kink in it when trying to align it with the logic board. I found that following the markings on the back housing were pretty close when adhering the cable and deciding where to put it. I got sick of messing with battery adhesives and tried to use none and the battery is totally stable once the phone is reassembled and doesn’t rattle around at all.

Quick question: Is this cable compatible with iPhone 5 SE A1723?

Brilliant. My only comments are that it doesn’t mention that the new replacement ribbon cable has adhesive strips that need to be used, so be very careful in the positioning of it before sticking it down. Also, the power button part of the new cable needs to be stuck unto the retaining bracket with glue which you need to have at hand. I used UHU as it is fairly inert and can be easily repositioned. Finally, I suggest you will probably need a magnifier of some kind (stand or glasses) to help in this repair as it is a lengthy process, and best taken slowly.

Great guide! The steps were clear and detailed enough for me to replace upper component ribbon without messing anything else up (which, unfortunately, sometimes does happen) :) The only small thing that I would perhaps mention is that the rubber camera bumper also comes attached to the replacement ribbon, so you don’t have to worry about the old one when you’re removing it. Same with the small strip of adhesive that is holding the contact clip - I recommend removing it since the replacement ribbon also has the same adhesive strip already attached to it.