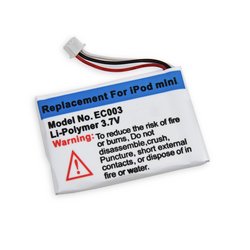 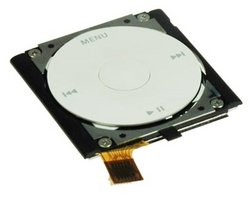 Track down a number of hardware problems using the following troubleshooting guides:

The iPod Mini (trademarked, marketed and stylized as the iPod mini) was a digital audio player designed and marketed by Apple Inc. It was the midrange model in Apple's iPod product line. It was announced on January 6, 2004 and released on February 20 of the same year. A second-generation version was announced on February 23, 2005 and released later that year. The iPod Mini line was officially discontinued on September 7, 2005 and was replaced by the iPod Nano line.

The iPod Mini uses the touch-sensitive scroll wheel of the third generation iPod. However, instead of the four touch buttons located above the wheel, the buttons were redesigned as mechanical switches beneath the wheel itself—hence the name click wheel. To use one of the four buttons, the user must physically push the edge of the wheel inward over one of the four labels. Like its predecessors, the wheel was developed for Apple by Synaptics. The click wheel is now also used in the fourth, fifth and sixth generation iPods and the iPod Nano, from first generation through the fifth; however, in the Nano and 5G iPods onwards, the click wheel is developed by Apple.

The two iPod Mini generations look almost identical, both inside and out. However, they use slightly different internal parts. Even if you know which iPod Mini you have, a quick look through the iPod identification system can't hurt.