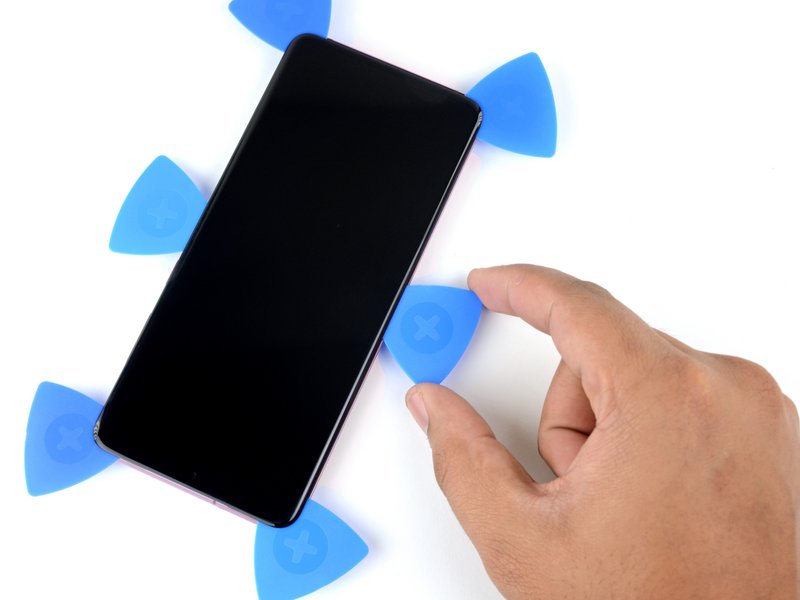 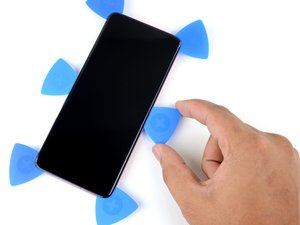 If the screen on your Samsung Galaxy S20 smartphone is failing to display images, is displaying a completely blank or black screen despite the phone being "on", is flickering, discolored, or is otherwise malfunctioning, use this handy solution page to solve your broken screen problems.

This diagnostic solution page should help you identify the cause of your broken smartphone screen and find a suitable solution to get your phone back up and running. If you’re having trouble with a black or blank screen on your Galaxy S20, S20 Plus, or S20 Ultra, this is the page for you.

If your screen is displaying images, but is having problems with touch input, try our Samsung Galaxy S20 Touchscreen Unresponsive solution page instead!

It’s possible that your phone screen isn’t displaying any images because the phone is off and the battery is dead. Normally, trying to turn on the phone with a low battery will prompt a display on the screen telling you to charge the phone, but if the battery is sufficiently discharged, the screen may not have enough power to display the prompt.

It’s also possible that your battery can’t charge because your USB-C port isn’t able to transmit power to the battery. If you have a wireless charging setup, you can try charging your phone wirelessly to circumvent the bunk USB-C port, or try gently cleaning out the USB-C port with a toothpick, isopropyl alcohol, and/or compressed air. (Pro Tip: use a dust blower to avoid the harmful environmental impact of spray can dusters.) Once you’ve connected your phone to a power source you know is working, try turning on the phone again.

If your phone still didn’t turn on, there may be a software issue preventing your phone from booting up. Just in case your phone is afflicted, you should perform a force restart while your phone is still connected to the charger:

Temporary files, background processes, and system glitches can cause your Samsung Galaxy S20's screen to go black and prevent an image from showing. To reset any firmware blips, you can perform a force restart on your phone. To force restart the Galaxy S20:

If the screen is still acting faulty, then you may try backing up your personal data (videos, photos, music files, etc.) and performing a factory reset on your phone. This option will delete all of the files and applications from your phone, starting it back up as if it was new. While this may remedy your problem in a less invasive way than some other options, you should only do so if you are fairly confident that the issue is a software problem. To perform a factory reset on your Galaxy S20:

Lithium Ion batteries like the one found in your Galaxy S20 are only rated for around 400-500 charge cycles before the battery capacity degrades to 80%. For most regular users, this will happen at the 1-1.5 year mark, at which the user will notice that their battery holds less charge and takes longer to reach a full charge. However, at around 50-60% capacity, the battery will start to fail to hold a useful charge and may even struggle with providing adequate power to handle the performance of the phone. If you’ve been using your phone for 2-3+ years and have amassed a thousand or more charge cycles, your phone may have trouble starting the hardware up, even when fully charged.

Additionally, lithium-ion batteries like the one in your Galaxy S20 don’t like to be kept at the extreme ends of their charge range (fully-charged or fully-discharged) for long periods of time. If you’ve kept your phone’s battery at one of these extremes (especially fully discharged) for multiple weeks or months, this may have degraded the battery life significantly, even if your charge cycle count is relatively low.

It’s possible that the screen won’t turn on because of a faulty battery. Although the phone should be able to power on without the battery while connected to a power source, some cases may prevent this from happening.

Case 1: If your battery and USB-C port are both malfunctioning, you won’t be able to turn on the phone because no power is getting to it. You may be able to provide power to the phone wirelessly, but because the battery is incapable of holding a charge, the phone loses power once the phone is lifted up to try to turn it on. To attempt to test this, you can try turning on the phone while it is resting on the wireless charging pad, being careful not to disturb or interrupt the wireless power. However, wireless charging outputs much less power than cable charging, so this may not be enough to power your phone. If your phone does turn on using this method, you’ll want to replace the daughterboard containing the USB-C port, as this will allow you to charge your phone moving forward. You’ll probably want to replace the battery too while you’re at it—Galaxy phones are notoriously glued down, so it’s best not to have to open them twice.

Case 2: If your battery is swelling, the change in volume might dislodge some important componentry within your phone, such as unplugging the display cable. In order to move around components, the battery will likely need to have swollen somewhat significantly, so you can check your phone’s physical appearance for bulging. Be sure to take off any cases before you check, as even the slightest bulge can indicate serious problems with your battery. If your phone is bulging, you should replace your battery immediately. You can use this Samsung Galaxy S20 Battery Replacement guide to do so, but if you haven’t taken apart a phone before, this may be a case to enlist an experienced repair technician. Swollen batteries can present several dangers, such as chemical leakage or combustion, so it’s important to use extreme caution while handling one. Be sure to dispose of your swollen battery properly as well—you can’t throw them in the trash!

If you’ve eliminated discharged/faulty batteries and software issues as a cause for your faulty screen, the most likely culprit is a broken display. The OLED display on the Samsung Galaxy S20 is responsible for generating the images and colors on the screen. It consists of a film of organic compound which generates light when an electric current is passed through it. Unfortunately, this film is subject to damage when it experiences ingress from oxygen or water, so cracks on the screen can potentially cause damage to the display, causing black spots or distortion. If your screen has significant visible damage such as large cracks, or if your phone has been submerged for a substantial amount of time or at great depths, this may be the cause of your display degradation. In any case, you will likely want to replace the display assembly of your Galaxy S20 device. You can do so using one of our screen replacement guides:

Although a rarer case than a broken screen, it’s possible that a faulty motherboard is preventing the entire phone from functioning. Since the motherboard controls all of the processes of the phone, its malfunction would prevent the screen from displaying images or accepting touch input. The most common ways to damage a motherboard (assuming the phone isn’t open) are by allowing water to penetrate the case or by unsuccessfully changing the BIOS settings (usually when attempting to “root” the phone).

Water damage will cause short circuits and corrosion on the motherboard, so if you do open the phone to start replacing components, you can take a look for any spots that look corroded as evidence. If you do see corrosion that looks localized, you might be able to clean it off with some 99% isopropyl alcohol to regain functionality of the phone.

Changes to the BIOS settings can also brick the motherboard, rendering it useless, but will only happen when trying to mess with the underlying operating software—so it’ll be fairly obvious this is the case if you were trying to root when it happened. Unfortunately, bricking the motherboard is oftentimes an irreversible process, so while you might be able to recover it with the help of an expert (why didn’t you have them root your phone in the first place?) it oftentimes means you’ll have to opt for a motherboard replacement.

In either case, you can replace the motherboard of your Samsung Galaxy device using one of our S20 motherboard replacement guides:

I buy a Samsung Galaxy s20fe 5g soon, on 5 October 2022, but some time after its screen blackout. The phone also works in the background and also works touchscreen, but don't show anyone on the screen. so please help me and resolve my problem ya replace my phone.